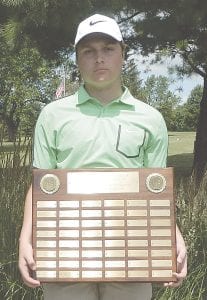 GRAND BLANC – The second week of the 2018 Flint Jr. Golf Association’s summer league is in the books after golfers in the Jack Nicklaus group made their way to Atlas Valley Country Club to compete for the coveted Henrickson Award Monday.

The league, which is divided into a 5-hole, 9-hole and 18-hole divisions, features junior golfers from across the area, with high school-aged golfers playing in the Jack Nicklaus group.

Davison’s Kamryn Johnston took home the hardware on the girls’ side with a 78, while the boys’ side saw Fenton’s Jackson Foguth take home the trophy by finishing the day with a 74. Johnston finished with a front-nine score of 36 and a 42 on the back-nine, while Foguth carded a pair of 37s.

Other scores on the girls’ side included an 84 from Madison Brigance of Grand Blanc, an 87 from Flint Powers’ Jolie Brochu, an 89 from Kearsley’s Elise Pariseau and a 90 from Davison’s Caley Ries, among others. Top finishers on the boys’ side included a 76 from Trent Barth of Goodrich, a 79 from Ranveer Ajimal of Grand Blanc, an 81 from both Swartz Creek’s Cameron Beckwith and Davison’s Craig Banes, a pair of 82s from Ashton Gaulin and Grand Blanc’s Nick Bruett, and an 85 from Grand Blanc’s Brendan Silpoch. 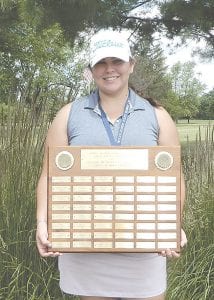 Last Monday, the FJGA saw its season open at Flint Golf Club. Medals were given out to the top-five golfers in both the boys’ and girls’ divisions of the Nicklaus group. On the girls’ side, Georgina Canavesio of Flint Powers Catholic tied with Goodrich’s Morgan Swett for first with an 86. For the boys’ division, Grand Blanc’s Nick Bruett and Flushing’s Andrew Nestor both finished with 75s to share the win.

Other scores for the girls’ tournament included a 90 from Goodrich’s Elizabeth Gibbs, a 91 from Johnston and a 93 from Davison’s Isabel Mabry to round out medalists. Brianna Ales (Flint Powers) had a 95, Brigance finished with a 96 along with Lily Horning (Fenton). Neeley Peterson (Swartz Creek) ended with a 97, Skyler Henry (Swartz Creek) had a 99, Halle Moore (Goodrich) and Ries both ended with 102s, Elise Pariseau had a 105 and Emma Bishoff (Kearsley) and Madeline Swett (Goodrich) finished with 106s.

Rounding out the medalists for the boys’ division were Barth with a 76, Foguth with a 77 and Silpoch with an 80. Jake McGeary (Lapeer) had an 81, Travis Gist (Davison) had an 82 and Beckwith, Dominic D’Anna (Lapeer) and Jake Waun (Grand Blanc) all finished with 83s. Gaulin, Connor Jewell (Swartz Creek) and Sean Spidle all had 84s and Craig Banes and Mitchell Carlson (Swartz Creek) each carded an 85. Max Baxter (Flushing), Grant Weller (Davison) and Grant Foren all had 87s, Jake Beauchamp had an 88 and Pierce Paling finished with an 89.

Next week, the Nicklaus group travels to Warwick Hills to compete for the Mallon Cup.

For full tournament results and to view the upcoming schedule, visit www.fjga.org.