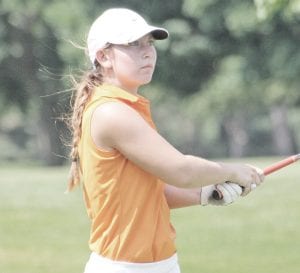 GRAND BLANC TWP. – Karsen Johnston of Davison and Keri Parks, a recent Flushing grad, led the girls with matching 74s in the Flint Jr. Golf Association’s final regular-season match of the season Monday at the Captain’s Club. FJGA director Bill Hense said that only 48 golfers showed up for the final. On the boys’ side Grand Blanc’s Trevor Bailey carded 77.

That solidifies the Braun Cup points-winners for the season. Brooke Thomas claimed the girls’ trophy with 250 points. Parks was second with 190 and Karsen Johnston was third with 180.

Joe Montpas won the boys title with 230 points and Noah Troyer was second with 200. Mitchell Hughes was third with 185. The trophies will be presented today.

Next week kicks off the season ending championship at Swartz Creek. The Nicklaus Group will have qualifying rounds on Monday and the top four in each flight will qualify foro second and possible third day of match play. The Arnold Palmer 18-hole group will join the championship rounds on Tuesday and Wednesday and the champions in all groups will be announced on Wednesday.