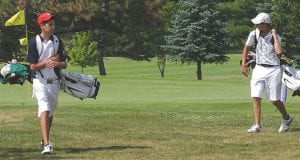 FJGA golfers will be back on the links for the 74th year this summer.

BURTON — The Flint Junior Golf Association is bucking a trend this year.

At a time when population in the area is declining and other organizations are contracting or disappearing altogether, the FJGA is expanding. In its 74th year of operation, the organization has:

• increased its youth golf clinics from seven to nine and opened a new Learning Center;

• and, for the first time ever, extended an invitation to select players outside of Genesee County.

Previously limited to kids who live or attend school in the county, the FJGA now will accept golfers from the varsity or junior varsity boys’ and girls’ teams at Lapeer East, Lapeer West, Holly and Brandon high schools.

“We’ve always had some pressure from other counties to join the program, and I’ve had coaches e-mail me about their players,” said FJGA director Loyd Walter. “We’ve opened the door just to the kids that played for those high school teams because those schools are under the umbrella of the Flint Metro League. We don’t want to expand it any further just yet. We’re going to evaluate the situation this year.”

About 25-30 players from those schools took advantage of the opening, helping to keep the total FJGA membership this year at just over 800.

“That’s a slight decline from last year but not as much as we expected,” said Walter. “When you lose 100,000 people in Genesee County, you know you’re going to take a hit.”

A new tournament named for longtime FJGA benefactor Dr. Harold Mallon will start this year. The Mallon Cup Challenge for 18-hole players will be held July 16 at Warwick Hills Golf and Country Club. Returning tournaments are the Henrickson Award July 2 at Atlas Valley Country Club and the Mancour Cup July 9-10 at Flint Elks Club. The Mancour winner receives an exemption into the Randy Wise AJGA Junior Open the week of Aug. 6-9 at Warwick Hills.

Clinics began May 30 and are held at various times and sites. Five of the clinics are at King Par, where a new FJGA Learning Center has been established. Go to fjga.org and click on Schedules & Times for the full schedule.