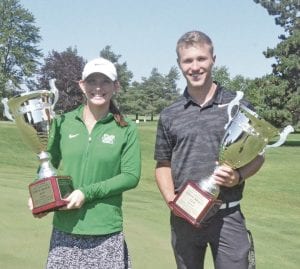 Kerrigan Parks and Trevor Bailey pose with their Braun Cup trophies on Monday at the Davison Country Club.

DAVISON — Flint Junior Golfers in the Jack Nicklaus group competed at Davison Country Club on Monday to earn their final regular-season points in hopes of capturing the Braun Cup, which is awarded to the boys’ and girls’ overall points winners. Trevor Bailey carded a 72 on the day to bring home the award, ultimately finishing with two first-place finishes and two runner-up finishes through five events for a total of 220 points. Meanwhile, Dylan Conte and Trent Barth both tied for second in overall points with 150. Conte shot an 82 on Monday while Barth did not compete in the event.

Other scores from Monday’s event include an 80 from Luke Harrington, 81s from Kearsley’s Jack Vollmar and Davison’s Travis Gist, 83s from Grant Foren and Lapeer’s Dylan Mullaney, 85 for Edward Farrell and Flushing’s Dylan Stankewicz, 86 for Trevor Maizland, 88s for Swartz Creek’s Mitchell Carlson and Cameron Beckwith and an 89 for Davison’s Craig Banes.

For the girls’ division, Flushing grad Kerrigan Parks took home the award, finishing with a total of 150 points in a tight race for the girls’ Braun Cup. Right on Parks’ tail was Cammi Lucia of Grand Blanc with 140 points and Jolie Brochu from Flint Powers Catholic with 135. Parks and Brochu both carded 78s on the day while Lucia fired off a 76 to lead the field.

“Lucia’s medalist round of 76 and Brochu’s third-place finish with a score of 78 made things interesting going into the final few holes,” noted Flint Junior Golf director Loyd Walter.

Tournament play began for 5- and 9-hole divisions on Monday and followed through Tuesday after press deadlines. For the Jack Nicklaus group, tournament play begins Monday at Swartz Creek with a qualifying round, followed by a semifinal round on Tuesday and a match play final on Wednesday.