Flint Junior Golf off to a hot start 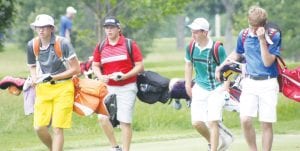 Parks was seven strokes ahead of Flushing teammate Brooke Thomas. Taylor Harding of Goodrich was third with an 85.

In all, 68 of the 84 players in the Nicklaus Group turned out in warm, humid conditions to open the FJGA’s 76th season.

FJGA golfers will move over to the Flint Elks Club next week for the twoday Mancour Cup. The low 16 scores on Monday will advance to Tuesday’s final round, with the winner decided by the two-day total. The winner gains exemption into the Randy Wise AJGA Open, an American Junior Golf Association event at Warwick Hills in August.