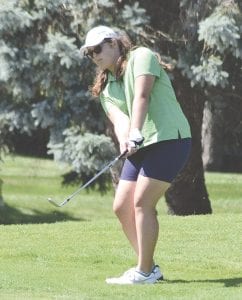 Davison’s Isabel Mabry, shown here during the Mallon Cup on July 7, beat Lapeer’s Brooke Gibbons in the semifinals Tuesday at Swartz Creek Golf Course to move on to yesterday’s championship round. Photo by Austin VanDaele

SWARTZ CREEK – The second round of the Flint Junior Golf Association’s (FJGA) Match Play tournament was held at Swartz Creek Golf Course Tuesday, as the top-four qualifiers in each flight from Monday’s opening round were pitted against one another. The winners moved on to play in Wednesday’s final round, held well after we went to press.

The semifinalists were determined by the four lowest scores carded in each division during Monday’s opening round, also held at Swartz Creek Golf Course.

In the girls’ championship flight, Keegan Miller finished atop the leaderboard with a 77. Gibbons qualified second with a 78, Mabry was third with an 80 and Morgan Swett qualified in fourth with an 80. Other scores included an 82 from Kearsley’s Grace Hoffman, an 83 from Goodrich’s Elizabeth Gibbs and an 84 from Swartz Creek’s Neeley Peterson.

In the girls’ first flight, Brigance finished as the No. 1 seed with an 85 and was followed by Bishoff with an 87, Ropp with a 91 and Ries with a 100. In the second flight, Moore qualified first with a 91, Britton was second with a 92, Madeline Swett was third with a 94 and Sexton was fourth with a 101.

The boys’ championship flight saw Barth qualify as the No. 1 seed after finishing with a 76. Andrew Nestor of Flushing finished with a 77 to qualify as the No. 2 seed but had to withdraw from the tournament due to a prior commitment. Taking Nestor’s spot as the second seed was Bruett, who also finished the day with a 77. Silpoch qualified as the No. 3 seed with a 79 and Ajimal qualified fourth with an 80. Other scores included an 81 from Swartz Creek’s Cameron Beckwith and an 85 from Davison’s Travis Gist.

Spidle took the top spot in the boys’ first flight with an 80. Finishing second was Andrew Lum of Flushing with an 83, though he also had to withdraw from the rest of the tournament due to a prior commitment. Foren took over as the No. 2 seed with an 83 Monday, McGeary finished third with an 86 and with an 87 was Craig Banes. The boys’ second flight was won by Ruddy with an 82, while Baxter finished second with an 86, Carr third with a 91 and Banes fourth with a 100.

Be sure to check back next week for a full recap of Wednesday’s finals. For full results, visit www.fjga.org.