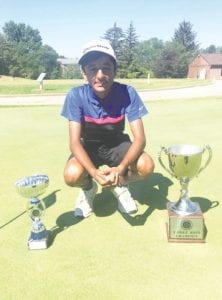 AREAWIDE –Golfers in the 5- and 9-hole divisions of the Flint Junior Golf Association summer league competed in their final tournaments of the season last week at various golf courses across Genesee County. All six of the groups within the divisions competed on Monday and Tuesday to determine new champions. Golfers in all 5-hole division groups as well as the 9-hole division’s Zach Johnson group competed at Swartz Creek while the 9-hole Michelle Wie and Phil Mickelson groups competed at Kearsley and The Jewel, respectively.

For the Phil Mickelson group, Ranveer Ajimal came away with the victory in the championship flight, finishing 5 & 3 over Sawyer Kochan. Nicholas Kurtiak defeated Carson Hennessey one-up in the first flight, Carson VanDever went one-up on Austin Bishop to win the second flight, Tristan Glann finished two-up on David Wright for the victory in the third flight and Ryan Garvey defeated Brendan Glann 3 & 2 to secure the fourth flight victory.

Golfers in the 18-hole Arnold Palmer and Jack Nicklaus groups competed in their end-of-the-season tournaments through yesterday, but were not yet finished as we went to press. For full results of each tournament, visit www.fjga.org.