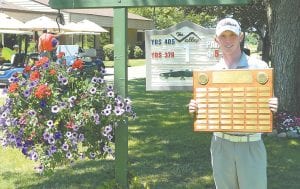 Trent Barth of Goodrich stands for a photo after winning the boys’ Henrickson Award on July 3.

ATLAS TWP. – On Monday, July 3, Flint Junior Golfers in the Jack Nicklaus group competed in their first major of the season, playing for the Henrickson Award at Atlas Township’s Atlas Valley Country Club.

Goodrich junior Trent Barth took the title for the boys’ 18-hole championship, shooting a 71 during a round that included five birdies. Kerri Parks of Flushing, a 2017 grad, secured the title for the girls’ 18-hole championship, carding a 75. Parks, who also won the Henrickson Award in 2015, is a twotime state Junior Amateur Champion and will be attending Marshall University in the fall. As for the rest of the golfers in the Jack Nicklaus group, round scores were not posted prior to press deadlines.

All other groups of the Flint Junior Golf Association were in action Monday as well, playing at Swartz Creek, Kearsley and Copper Ridge. In the Arnold Palmer 18-hole boys’ and girls’ divisions, both Jake McGeary and Georgia Canavesio carded the low scores for the day, with McGeary shooting an 83 and Canavesio carding a 78. In the 9-hole boys’ championship, Ranveer Ajimal took the top spot with a 38 for the Phil Mickelson group. Abby Schell carded a 41 to lead the girls’ 9-hole championship in the Michelle Wie group. 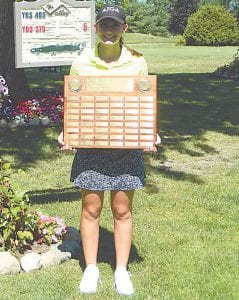 Kerri Parks of Flushing poses for a photo after shooting a 75 to win the Henrickson Award at Atlas Valley Country Club.

Gunnar Birmingham took the top spot for the 9-hole boys’ Zach Johnson group, carding a 39. In the 5-hole boys’ and girls’ championship flights, Alec Coenan took first with a 19 for the boys and Ava Kendricks secured first for the girls with a 25. In the Bubba Watson 5-hole division, both Josh Jackson and Evan Calderaro carded a 24 to share the top spot.

FJGA players will compete Monday and Tuesday at Flint Elks for the Mancour Cup. For full scores and schedules from all Flint Junior Golf Association tournaments, visit www.fjga.org. – A.V./L.P.