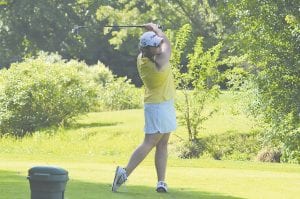 Isabel Mabry of Davison qualified as one of the top-four individuals in the girls’ championship flight of the Jack Nicklaus group to compete in the final two days of the FJGA season. Photo by Austin VanDaele

SWARTZ CREEK — For the final time this summer, high school-aged golfers in the Jack Nicklaus group of the Flint Junior Golf Association (FJGA) took to the course to compete in the first of a three-day tournament at Swartz Creek Golf Course on Monday. Golfers competed in a stroke-play round to determine the top seeds in each flight, with the top-four low scores in each flight advancing to the match-play bracket, held Tuesday and Wednesday.

In the girls’ championship flight, Grace Hoffman of Kearsley finished as the No. 1 seed with a 74, while Davison’s Isabel Mabry finished second with an 80 to advance. Fenton’s Brook Herbstreit and Grand Blanc’s Madison Brigance both tied for the final two qualifying positions with a pair of 81s. Elizabeth Gibbs of Goodrich carded an 82, Alexandra Sexton carded an 86, Emily Wilson of Swartz Creek had an 87, Brooke Kalisz of Davison had a 91 and Olivia Canaday, also of Davison, finished with a 93.

Kelsey Malone secured the No. 1 seed in the girls’ first flight with a 97, followed by Emily Madill of Goodrich with a 90 and Davison’s Chloe Evoy and Goodrich’s Madeline Swett with a pair of 91s as the other qualifiers. Victoria Carnell carded a 93, Olivia Rushton a 94, Angela Hanners a 98, Amanda Miller a 103 and Paige Fondren a 123.

In the boys’ championship flight, Ranveer Ajimal finished as the top seed with a 70. Jack Kolka carded a 74 for the No. 2 seed and Grand Blanc’s Brendan Silpoch and Ashton Gaulin both carded 76s to advance. Cameron Beckwith of Swartz Creek finished with a 77, Dylan Conte of Fenton carded a 79 and Robert Burns of Flint Powers and Dominic D’Anna of Lapeer both finished with 81s. Travis Gist of Davison carded an 83, Jake McGeary of Lapeer finished with an 84 and Ryan Truchan of Grand Blanc carded an 88.

For the boys’ first flight, Grand Carr secured the No. 1 seed with an 81, followed by Grant Foren of Grand Blanc, who also shot 81 but was named the No. 2 seed. Pierce Paling qualified in third with an 83 and Zach Limas was fourth with an 88. Connor Jewell of Swartz Creek finished with a 90, Coy Wilson carded a 91, Noah Ruddy finished with a 92 and Davison’s Craig Banes finished with a 93.

Andrew Campbell secured the No. 1 seed in the boys’ second flight with an 85, while Lapeer’s Nolan McGeary was named the No. 2 seed after also shooting an 85. Austin Bishop finished as the No. 3 seed with a 90 and Nathan Reynolds qualified fourth with a 91. Clayton Wistuba finished with a 92, Elijah Beland carded a 95 and Davison’s Jack Banes finished with a 96.

The top-four qualifiers in each flight advanced to a match-play bracket stage on Tuesday and Wednesday after we went to press. Check out next week’s edition for a full recap.