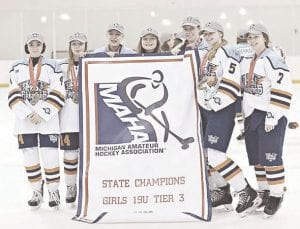 DIMONDALE — Lauren Eager, a Brown City native, has been instrumental in the Flint Lady Jr. Firebirds clinching a state title.

Eager and nine other girls formerly played at the Polar Palace in Lapeer on an all-girls teams with their own equipment and not much experience. In that first season, the then-Lapeer Hericanes often went weeks at a time during league play never scoring a goal.

In their second season, the Hericanes added some new faces to their lineup and improved tremendously. The team claimed the Little Caesars regularseason and playoff championships, and earned runner-up in the 2019 State playoffs. An amazing accomplishment given where the team had started.

This year, the team is playing under a new parent hockey association, the EMHA, just south of Lansing and as the Jr. Lady Firebirds. Ten of the original cast members from season one, along with the four added in season two plus four new teammates won the state championship in the Michigan Amateur Hockey Association (MAHA).

In round one against Copper Country the Lady Firebirds pulled off the 10-0 win. Every player on the team scored a goal, with the exception of goalie Eager. In the Saturday games, Flint faced Traverse City and defending state champs, Marquette. Flint beat Traverse City 8-0. Marquette also dispatched Copper Country and Traverse City in their round-robin action, setting the stage for a rematch of last season’s State Final.

Making key plays for Flint were Ella Bernard, Rebecca Larson, and Mary Bottles, along with the play of Eager, notching a 3-1 win. Against Marquette in the title match, key plays came from Haleigh Hansen, Bottles, Karli Kreger, Brooke Hubert, Tori Wisneski and Eager who allowed just one goal all weekend.

“I am somewhat speechless to be honest. I was here on day one, and I remember all of these faces that would come back to the bench after being blasted by our opponents. None of them ever complained, and none of them would ever quit. I decided, (because of their attitudes) that I would never quit on them either. Told them I would be their coach for as long as they would have me, and we would try to see it through together. I think we just saw it through and I could not be prouder of these kids.”