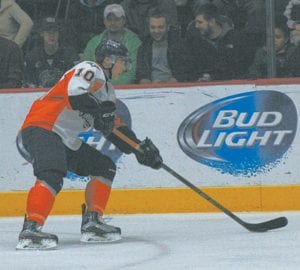 Flint’s Nicholas Caamano kicks the puck back to his defensemen.

FLINT – After snapping a 15-game losing streak last Wednesday, the Flint Firebirds lost a pair of closely contested games at home this past weekend, most recently on Saturday to the Kitchener Rangers, 2-0. Flint had plenty of scoring chances but couldn’t stop Kitchener’s Dawson Carty from pitching a shutout. In fact, the Firebirds hit the post three times.

The scoring, though, took a while to get started. The Rangers’ Mason Kohn buried one on the power play at 11:41 of the second period, and with less than four minutes left in the middle frame, Brandon Robinson doubled their lead.

The night before against the Sudbury Wolves, however, was a seesaw battle that resulted in Sudbury taking a 5-4 overtime victory. The Wolves got it going quickly, scoring shorthanded on their first shot of the game from Michael Pezzetta. Later in the period, Dmitry Sokolov added another to give the Wolves a 2-0 lead at the break.

In fact, they went up 3-0 at the 7:24 mark of the second period with a goal from Alan Lyszczarzyk before Connor Sills finally stopped the bleeding, giving Flint its first goal about a minute and a half later. Zack Pittman found the back of the net with less than two minutes in the middle frame, but Sudbury’s Brady Pataki came right back down after the ensuing faceoff and made it a 4-2 Sudbury advantage.

In the third is when the Firebirds began to catch their second wind, beginning with a Ryan Moore goal at 6:46. With less than three minutes remaining in regulation, Luke Kirwan fired one home to draw even and force overtime. Mikkel Aagaard, though, ended the game with just :51 left in the extra period, giving Sudbury the win.

After 15 consecutive losses, the Firebirds finally got back on the winning side on Wednesday in Saginaw. The game saw two huge momentum swings, but Flint pulled it out with a thrilling 4-3 overtime victory over the Spirit. The win gives the Firebirds a 4-3 advantage in the Coors Light I-75 Divide Cup series with one more matchup against the Spirit remaining.

The Firebirds began the game with one of their hottest starts of the season. Just 5:59 after the opening faceoff, Francesco Vilardi ended up all alone with the goaltender and made a nice move to bury the game’s first goal after a stellar steal and pass from Alex DiCarlo. Just a few minutes later, Vilardi found himself all alone with the goalie once again thanks to a pass from Jacob Collins. Vilardi put it in for his eighth of the season and 2-0 Flint lead.

The momentum began to snowball for the Firebirds, and with less than five minutes remaining in the opening period, Dane Johnstone sent a pass from behind the net to Nicholas Caamano, who put it over the goalie’s shoulder to make it a 3-0 advantage heading into the locker room.

Flint’s power surge, however, stopped right there. Saginaw began to shift it back to its side, beginning with a Mike Davies goal at 3:32 of the second period. Flint continued to push in the third but Saginaw got goals from Kris Bennett at 7:57 and a power-play tally from Hayden Hodgson with just over three minutes remaining, forcing overtime.

The extra frame went back and forth, and included a Firebirds’ power play, but the conclusion wouldn’t happen until the game returned to 3-on-3. With just 35 seconds remaining in overtime, Flint came down on a rush and Pittman’s pass to the front of the net was put in by Moore, giving the Firebirds the win and ending their winless streak that dated back to a Dec. 18 road win over the Oshawa Generals.

Flint still remains 10 points out of the final playoff spot in the Western Conference, currently sitting at 15-29-4-2 for 36 points with 18 games remaining on the schedule. Next up, Flint travels to Kitchener on Friday night before returning home Saturday to host the Owen Sound Attack for Flint Tropics night, which will include Tropics themed jerseys.