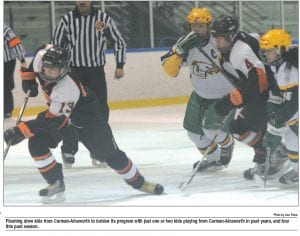 FLINT TWP. — A continual downward trend in participation numbers will leave Fenton and Ortonville-Brandon as the only remaining standalone high school hockey teams in the Flint Metro League for the winter 2011-12 season.

Co-ops are not new to Flushing/Carman-Ainsworth, however, as the team has skated as one for the past several years, says coach Jon Jepson, also the General Manager at Flint Iceland Arenas. During the regular season, Flushing often skates against several Metro League teams. Those teams will have a new look this upcoming season after several have been forced to co-op because of low participation numbers.

In the Metro League, all but Fenton and Brandon are co-op teams. Linden co-ops with Lake Fenton and Durand, with Durand likely to pull out of the co-op with just two kids interested in playing. Flint Kearsley and Holly are a co-op squad, Lapeer East and West will now skate as a combined team with West as the primary after budget cuts axed one squad in June. And, last season’s top dog in the Metro, Swartz Creek, has approved a new two-year co-op with Clio now that Clio’s twoyear co-op with LakeVille has expired. Swartz Creek approved the co-op at its June 23 board meeting and will operate as the primary for the program, while Clio approved it June 28. Clio athletic director Larry Lamphere confirmed that Clio has seven kids ready to skate but could certainly see more interested in playing by winter.

“Last year was the first time we did not have cuts. When you keep a minimum you have a lot of inexperienced players, plus the injury concerns, academic ineligibility, one goaltender and not much of a back up. When you keep kids that have never played, their playing time is minimal because of the inexperience and you just can’t put a kid out there to get hurt. You have to practice how you play, so there is a safety issue.”

Clio’s entry back into the Metro is especially exciting for Badal.

“The one part that excites me about the Clio kids, and I don’t recruit,” Badal said. “I make one phone call to each kid in the summer checking interest in playing. I don’t beg kids to play, they play for me because they want to play and they want to represent Swartz Creek. In our playoff game last season, the Clio kids never gave up even when they were down 6-0 and to take on kids with that mentality is very exciting.”

“Once a team co-ops they have to go through a renewal process every two years,” explained Tom Rashid, Associate Director of the MHSAA and overseer of the co-op programs. “The teams have to indicate what the win/loss records were, how many kids tried out and how many were cut and that is all monitored in the renewal process.”

Also of interest in the Lapeer County area is the new co-op that will skate as the LakeVille Falcons and includes new skaters from North Branch and Dryden, schools that have never had a high school hockey team.

With current LakeVille coach and Swartz Creek resident Jake Haynes now serving as an assistant to Badal, LakeVille athletic director Joe Beckwith says that the coaching position will be posted in the coming months. The new LakeVille co-op will likely skate out of the Polar Palace in Lapeer drawing five kids from LakeVille, six or seven from North Branch and five from Dryden.