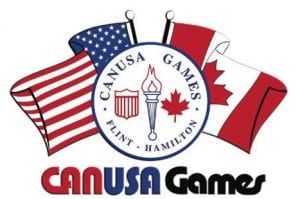 HAMILTON, Ontario – Now in its 60th year, the 2016 Flint Olympian Games conclude today with an Appreciation and Recognition Dinner at the First Presbyterian Church, 746 South Saginaw Street in Flint, beginning with a reception at 5:30 p.m. Next up are the Opening Ceremonies and the release of the competition schedule for the 59th CANUSA Games starting on Aug. 5 at noon at Bernie Arbour Stadium. The event then will hold closing ceremonies on Aug. 7 starting at 9 a.m. at Mohawk College.

CANUSA started in 1958 with 200 athletes competing in seven different sports and is designed to encourage international friendship through Olympic style competition between athletes from Hamilton and Flint. Now the annual extravaganza caters to over 1,200 participants age 10-17 in 15 different sports according to www.canusagmaes.com.

Among the sports at the 2016 CANUSA games in Ontario were boys’ and girls’ basketball, boys’ and girls’ soccer, baseball, softball, skeet, 10-pin bowling, darts, swimming, flag football, tennis, golf, gymnastics, track and field and volleyball. While this year’s games were scheduled to take place in Flint, it was decided Hamilton would host because of what organizers referred to as, “water supply issues.”

“The CANUSA Games Organizing Committee and the City of Hamilton, Ontario have demonstrated our motto by their willingness to host this summer’s games in light of the challenges our City faces at this time,” says Flint CANUSA Games Director Tony Sitko in a March 30 press release. “We look forward to the continuation of the Games and the opportunity to host the CANUSA 60th Anniversary in Flint, Michigan in the summer of 2017.”

Another facet of CANUSA is a challenge between the mayors of Flint and Hamilton. This year’s face-off will take place Aug. 6 and will feature an event chosen by the host.

As for what each individual takes away from this competition, according to that same press release, “While sport competition is a major part of the Games, the real focus is on creating and fostering international friendships. In many instances, this three-day event has developed friendships, which have grown and continued for many years after the competition has ended. In addition to friendship, CANUSA is also focused on encouraging lifelong physical fitness and activity.”

The Greater Flint Olympian Games, on the other hand, commenced on July 12 with a physical fitness walk that began at Northwestern High School followed by the opening ceremonies at Guy. V. Houston stadium. This format varied from CANUSA by also offering sports including ice hockey, golf, bitty ball, archery and weightlifting.

There will also be a four-person golf scramble fundraiser at IMA Brookwood, 6045 Davison Road, on July 22 beginning with a shotgun start at 9 a.m. Details: 810-760-5252 or www.flickr.com/photos/flintolympianandcanusagames/.