Flint Olympian Games off and running 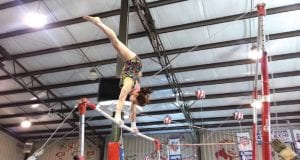 ORTONVILLE — In order to determine who gets to represent Team USA at the CANUSA Games on Aug. 9-11 in Hamilton, Ontario, the 57th Annual Flint Olympian Games launched on July 9 with its opening ceremonies at Flint Northwestern High School followed by a wealth of competition such as soccer, track and field and boys’ basketball.

Last Saturday, GOB Gymnastics in Oakland County hosted the girls’ All Around and boys’ and girls’ tumbling and toddler tumbling events, where Kelsey Fisher and Hope Verville posted All-Around scores of 34.90 and 34.65, respectively, in the 10-year-old division. Michelle Clever came out ahead in the All-Around with 35.40 points in the 11- year-old division, Abby Line was second with 35.25 and Lydia Kahler was third with 35.15. Winning the 12-year-old division was Emily Sosnoski with an All- Around mark of 36.05, Cheyenne Yehle had 35.60 and placing third with 34.55 was Madison Kirkpatrick.

In girls’ tumbling action, Audrey Craycraft claimed the 5-6-year-old division with a score of 9.00 and Gracie Lowe had a 6.50, Lainey Craycraft charted an 8.80 in the seven-year-oldand up category as the only competitor and five-year-old Trevor Hall had 8.40 points in the boys tumbling. The girls’ toddler tumbling was highlighted by four-year-old Cassie Ward scoring a 9.00 and in boys’ toddler tumbling managing 6.30 points was Paul Frezza.

The next day, the games shifted back to Genesee County at the Grand Blanc Sportsman’s Club with the Sporting Clays for under 18 males and females, adult males and adult females. Because each shooter had 50 targets to hit, Logan Willyerd won the 12-and-under division with a score of 25 by edging out Dylan Dick and Stuart Janisk with 24 points each and Lyle Bonney claimed the 13-16 year-old championship with a 39, John Gilliam was also impressive with 37, Jessica Taylor had 32, Brice Worden laid down a 30, Breanna Gorman put up a 27 and Sam Cook rounded out the age group with 25. The 17-21 year-old competition wasn’t nearly as heated as Kayla Miller shot a 14 against an otherwise empty field and in the 41-50 category George Gilliam III stood tall with 40, Alexander Bonney gave him a strong challenge by hitting a 37 and scoring 28 was Scott Janisk. Michael Taylor then had 21 as the only 51-60 year old to compete, George Gilliam Jr. had a 44 in the same role for the 61-and-up category and the ladies were led by Jessica Taylor with 32, Breanna Gorman had 27 and connecting on 14 of her shots was Kayla Miller.