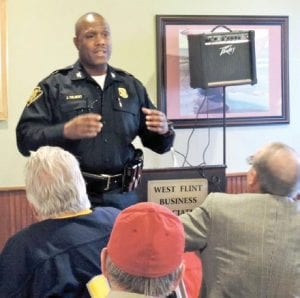 Speaking to the West Flint Business Association last week, Chief Tolbert said he is focused on many solutions including community engagement, youth education, increased use of technology, business alliances and specialized training for police officers.

Flint is one of ten cities involved in a Violence Reduction Network that gives it access to resources and technical assistance from Washington D.C., Chief Tolbert said. Participating cities share best practices with each other.

Chief Tolbert said he also started a Flint Police Foundation to help with unfunded mandates. A $1.1 million grant he obtained from the Ruth Mott Foundation is aimed at reducing crime on the north end of Flint.

A Citizens Radio Patrol was started to assist police. Neighborhood Service Centers, formerly mini stations staffed by police, are now staffed by citizens. That frees up more officers to be out on the street preventing crimes. The citizen group helps with conflict mediation in non-criminal cases and taking crime reports.

Technology being implemented in about two weeks will free up more police time by setting up a non-emergency phone number. Less serious crimes that now are being reported to 911 can be directed to this number to free up police for faster service on high priority calls, Chief Tolbert said.

“We hope to see calls for service go down and response time go up,’’ he said. “Reporting crimes will be easier for people who say I called and they never came. We are now giving everyone a venue to report crimes.”

Plans also are being made to bring in AmeriCorps workers to maintain better community contact and awareness of neighborhood crime problems, he said.

Efforts to maintain weekly contact with young people lets them interact with police officers in friendly situations, aimed at reducing the perception that police are the enemy.

Funding is being sought to start a Police Explorer program to bring youth in regular contact with police officers and hopefully cultivate a future generation of officers. The Explorers would be provided uniforms and work with officers on various activities to break the “us vs. them” negative stereotype, Chief Tolbert said.