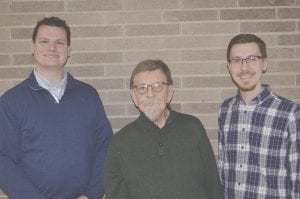 On May 5, the FSWE will be hosting an all-Spanish music program at the Central Church of the Nazarene in Flint. The production, entitled “Viva la Musica,” will feature a mix of classical and contemporary Mexican compositions, along with an array of pieces rooted in traditional Spanish dances and Latin percussions.

Donald Clough, the FSWE’s original founder and current conductor emeritus, said that the concert is aimed at honoring Mexican history and culture with a rousing performance of Hispanic-based tunes.

“All the pieces will have a feel of Mexican and Spanish music, whether they’re written by American composers or traditional Spanish composers,” he said. “It’s powerful music.”

FSWE conductor Michael Keller and assistant conductor Chris Anderson will be directing pieces that pay homage to different aspects of Spanish and Mexican music—such as compositions based on tango and fandango dances and “Malaguenas” written by the likes of Spanish composer Ernesto Luceana and American conductor Clifton Williams.

Another of the concert’s featured numbers will be a “bullfighter march” written by Spanish composer Pasqual Perez Chovi. Clough, who will be conducting the march, described the composition as a staple of Spanish music.

Anderson, of Flushing, said that performing traditional Spanish compositions with wind instruments and percussion—as opposed to a full orchestra with stringed instruments—gives the music a somewhat different feel but stays true to the heart of the pieces.

Since 1966, the FSWE has entertained the Greater Flint area with 6 to 10 concerts each year, while providing an opportunity for the community to enjoy instrumental music performed by seasoned local musicians. Originally named the Flint Civic Wind Ensemble, the organization became the Flint Symphonic Wind Ensemble in 1983 and received non-profit status in 1999.

During its existence, the FSWE has played a variety of concert themes. But performing on Cinco de Mayo for the first time is a special experience for its members, who are relishing the chance to recognize one of the most important dates in Mexican history with a musical performance.

“Our hope is that we touch people’s lives with our music, and that they leave our concert excited, happy and thrilled with what they just heard,” said FSWE conductor Michael Keller.

The FWSE production “Viva la Musica” will be free and open to the public, but freewill donations are encouraged. The concert will start at 3 p.m. from Central Church of the Nazarene, which is located on 1261 West Bristol Road.