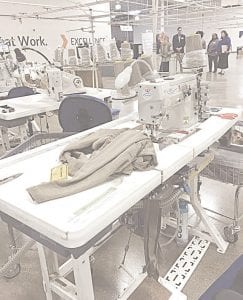 “We’re working with our partners on attracting talent and have held three successful job fairs,” Tucker said. “There’s investment going on outside the TIF areas. By bringing these things in and increasing our exposure, we’re seeing investment pay off in other areas as well.”

While the township suffered setbacks with the loss of Sears and Lowe’s, other new businesses stepped in to fill the void. These include Peckham, which employs people with disabilities to make coldweather garments for the U.S. military; Maximus, a call center company; Ground Effects, which makes spray-in liners for GM pick-up beds; Wahlburger’s, a restaurant owned by actors Mark and Donnie Wahlberg and their brother, Paul Wahlberg; and Ashley Homestore, which sells furniture and mattresses.

One of the biggest projects undertaken this year has been the study of whether to purchase abandoned Pirate’s Park for use as a community park. The township conducted an online survey to gauge the public’s interest in developing a community park and what amenities they would like to see included.

The township has the opportunity to accept a $1.5 million Michigan Department of Natural Resources grant for the purchase of the park, but it is still in the due diligence stage of completing a title search, environmental survey and two property appraisals. The township has until May 2021 to make a decision on whether it will accept the grant and purchase the property.

Businesses like Barrett Donut and SERVPRO left other communities to expand their operations in Flint Township. Buildings that once sat vacant are being repurposed, and current businesses are expanding and remodeling, including K-Mart, King Par, Toys- R-Us, Office Max, Valley Restaurant, Fitness USA, Furniture Row, Wears Like New, John P. O’Sullivan Distributing, Coldwater Creek and Talbots. Planning Commission member Carol Pfaff-Dahl announced at a recent Board of Trustees meeting that the commission approved the building of a new Culver’s restaurant on Miller Road between Curtis and Ketzler drives.

Tucker said the township also has $2 million in permits out for construction of new housing. The entries to the township are being maintained to present a more welcoming atmosphere, and decorations and banners have been installed.