Flint Township getting in on Bricks action 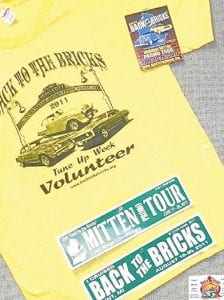 Craig Parker, a township resident and classic car owner, created this promotional board at the Flint Township Hall.

FLINT TWP. — “ We wanted a piece of the action and they gave it to us,’’ said Craig Parker, describing to the board of trustees how Flint Township became one of five area municipalities hosting a Back to the Bricks Tune-up Party next week.

Parker, a township resident and classic car owner, is spearheading the Flint Township lap on Tuesday which is described as a “tune-up” for the main event in downtown Flint, Aug.16-20.

Speaking at the township board meeting Monday night, Parker said he is expecting 500 to 2500 cruisers at township activities based on about 1,000 cars that turned out for last year’s first tune-up event in Davison.

“ This project is so important to Flint Township’’ Parker said, emphasizing the financial benefit to local businesses. He quoted estimates he’s heard that BTTB brings more tourist money into Genesee County than the Buick Open golf tournament did.

“ This is our first year and hopefully everything works out. It’s been months of time-consuming work,’’ he said.

Parker said he expects the crowd to start gathering as early as noon at the Patsy Lou Mega Lot at Corunna and Linden roads but official events including a favorite car judging are scheduled from 2-4 p.m. at that location.

At 5 p.m., activities will move to Duke’s Car and Stereo on Miller Road where commemorative T-shirts and free prizes will be given away.

One of the cars featured on this year’s BTTB volunteer T-shirt is Parker’s 1968 Chevelle, he said.

“My car is going to go on 10,000 Tshirts,’’ he said, explaining that it was chosen because sponsor Patsy Lou car dealerships wanted to feature the make of cars they sell – Chevrolets and Buicks,

Parker urged spectators to get out of work, get a lawn chair and sit out on the Genesee Valley lawn to watch the informal parade between 4 and 5 p.m. on Wednesday when cruisers move from Patsy Lou to Dukes.

Parker said he has worked with police and others to try to prevent traffic congestion like that in Davison last year when cars were backed up down M-15.

Township supervisor Karyn Miller praised Parker for his hard work organizing the event and for a bulletin board about it that he put up at the township hall.