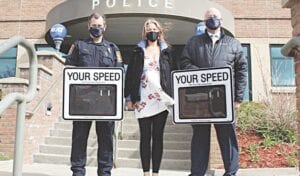 FLINT TWP. — The Flint Township Police Department has a few more tools in its arsenal to help with traffic safety, courtesy of a generous donation from a local foundation.

On April 23, Flint Township police announced that it had acquired two new radar speed signs to monitor speeding in the community. The department purchased the new signs with a $5,000 donation made by the Hougen Foundation, a nonprofit affiliated with Hougen Manufacturing Inc. in Swartz Creek.

Holly Hougen, who is the administrator for the Hougen Foundation, said that the foundation worked with FTPD Community Resource Officer John Chisa to find the most useful source for the donation in the department.

“We wanted to make an impact for our local police and say ‘thank you’ for everything they do for us as a community,” she said. “These speed signs will help the department utilize their resources well.”

With the addition of the new signs, Flint Township police now has four portable radar speeds signs and a radar trailer to deploy throughout the township.

Flint Township Police Chief Kevin Salter said that the department’s speed signs work independently of a patrol vehicle and do not need to be manually operated by a police officer. The radar, which captures the speed of passing vehicles, displays the speed on a large LED panel and flashes if a vehicle is posting an excessive speed.

“We’ve gotten a good reception about our radar signs, and we get a lot of requests from residents to have a sign placed in their neighborhood,” Salter said. “They are a good tool for helping us to meet traffic safety goals, along with the visibility of our patrol cars on the streets and traffic safety education.”

To request temporary placement of a radar speed sign in your neighborhood (Flint Township residents only), visit flinttownshippolice.org/…/14/MenuGroup/Public.htm.