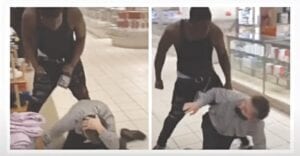 Police are searching for two people in connection to the assault at Macy’s, which was recorded and shared on social media.

FLINT TWP. — Flint Township Police are searching for two persons of interest in connection to an assault that happened at the Genesee Valley Center.

On June 15, police were called to the Macy’s department store inside the Genesee Valley Center after a store employee was attacked by a customer. Investigators reviewed surveillance footage from Macy’s, which showed a Black male assaulting a white store employee and fleeing with another person. The assault was also recorded and widely shared on social media.

Police said that they want to question Damire Canell Palmer, 18, of Mount Morris and Damarquay Jovan Palmer, 22, of Flint Township, for their possible connection to the attack.

According to the video post of the incident, the assault happened after the store employee allegedly called a Black customer the “n” word while talking on a cell phone. That customer—believed to be Damire Palmer—walked up to the employee and punched him, then knocked the man to the floor several times. Damarquay Palmer is believed to have filmed the attack and posted it to the internet.

Investigators have not confirmed if the assault was racially motivated, and they have not released details on the condition of the man who was assaulted. No charges have been filed at this time.

Macy’s issued the following statement about the incident:

“We are deeply saddened about the incident that took place on Monday at Macy’s Genesee Valley as the safety of Macy’s customers and colleagues is our top priority. Violence in the workplace of any kind is unacceptable. All the materials from the evening have been reviewed and it is clear that the attack was unprovoked. We are working closely with local authorities on this investigation, and will defer any further comments about the case to them per policy.”

A Macy’s spokesperson also confirmed that the store and mall management have added additional security to ensure that “customers and colleagues can safely enjoy their shopping experience.”

Anyone who knows the whereabouts of Damire Palmer and Damarquay Palmer is urged to contact Detective Hart at 810-600- 3250 or Crime Stoppers at 1-800- 422-JAIL and crimestoppersofflint.org.