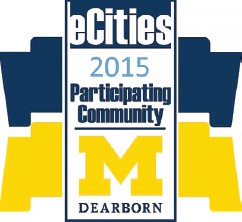 The Entrepreneurial Cities (eCities) study is conducted by researchers at iLabs, located at the University of Michigan-Dearborn’s Center for Innovation Research. eCities surveyed 66 communities from 29 counties across the state that are home to 20 percent of Michigan’s residents, and 20 percent of Michigan entrepreneurs who earn nearly $1.8 billion in self-employed income, according to a press announcement.

A recognition held in October recognized five-star and four-star communities.

Recognized 2105 eCities communities are cited in an article in the January 2016 issue of Michigan Township Focus magazine, published by the Lansingbased Michigan Township Association (MTA), which assists in the eCities project.

Township Trustee Frank Kasle referenced the article and proudly displayed the accompanying eCities certificate of recognition at the January 4 township board meeting.

Kasle commended and credited Tracey Tucker, the township’s economic enhancement director, for “doing the kind of job that got us this award.”

Tucker said that Flint Township has participated in the eCities program since 2012 and garnered four-star recognition in all but one of those four years when “It did not hit a certain level” of business development due to some losses on Miller Road. But the township received three-star recognition that year, she said.

Begun in 2007, the annual eCities project’s primary purpose is to interpret and share best practices for entrepreneurial growth.

The City of Grand Blanc was among six cities recognized in 2015 for “best practices.” eCities uses a 30-item instrument to measure entrepreneurial based on six factors – Clustering, Incentives, Growth, Policies, Community, and Education. All quantitative data is taken from publicly available records including the U.S. Census, local building department records, city and county assessing rolls, and state crime reports. Based on that, interviews are then conducted with local economic development officials from top-performing communities to probe their successful policies and procedures.