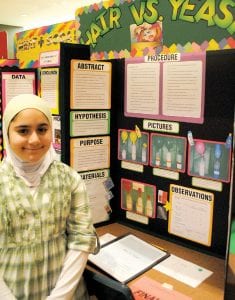 At the event, 297 students competed and out of those, 75 finalists were identified by judges March 4. The finalists were then interviewed by several judges the morning of March 5 to determine the ranking and who would become the recipients of nearly $32,000 in awards that included scholarships, bonds, prizes and, for four senior division students, an all-expenses paid trip to attend the Intel International Science & Engineering Fair (ISEF) in Los Angeles, Calif. In addition to the scholarships and trip to ISEF, the senior division winners also received an Apple iPad.

“It is very reassuring to talk with students and judge science fair projects — these kids are bright, inquisitive, and creative and are developing real aptitude for science”, said John Wambaugh, who has been director of the Flint Area Science Fair for 19 years. “In these difficult times that our state and country are experiencing it is reassuring to see what our youth, who will be the leaders of tomorrow, are doing to prepare.”

Senior Kaleem Qazi, who is homeschooled, won fourth place and a $1,000 scholarship in the senior division finalist category for his project, “Comparison of Methods for Hemoglobin Quantification: Electrical Conductivity vs. Colorimetry.”

Belal Khoulani, a seventh-grader from Genesee Academy, won third place and a $500 bond for the project, “Which bite is the real killer?” Sixth-grader Alaina Skellett from St. John Vianney Catholic School won sixth place and a $100 bond for her project, “What bacterial cleaner kills the most bacteria?”

In the junior division earth and chemistry finalists category, Genesee Academy seventhgrader Sahar Galal won fourth place and a $400 bond for the project, “The Cleaner the Water the Better.”

Zainab Hafez, a fifth-grader from Genesee Academy, won sixth place and a $50 bond for her project, “Hair vs. yeast.”

“Everyone is a winner” Wambaugh likes to say, and FRSF recognizes all students who participate. Students not selected as finalists are each interviewed by a judge to get encouragement and to help them learn how to do better science next time. They also all received a goodie bag of prizes and a ribbon.

The Flint Regional Science Fair Board thanks the many fair sponsors — individuals and organizations, for their commitment to the community, to youth and to the importance of science and technology. The board also wishes to thank its many contributors for their generous support, and the more than 50 judges who gave their time and talents to meet with students one-on-one to review projects and provide encouragement.

“The efforts of many dedicated volunteers makes this Fair one of the best in the nation,” said Wambaugh.