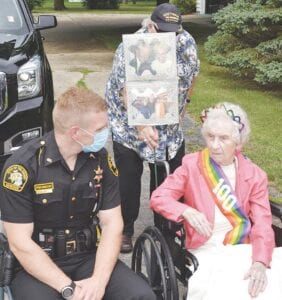 Birthday girl Dorothy Gramer was lavished with love by her family, friends and caretakers—plus some special guests from the Genesee County Sheriff’s Department. Photo by Ben Gagnon

FLINT TWP. — One of Flint Township’s oldest residents celebrated her 100th birthday in style this past weekend, thanks to a special celebration arranged by her family.

Dorothy Khull Gramer, a 50-year resident of Flint Township, received a drive-thru birthday parade outside her home on Sunday afternoon. Friends and family members decorated their cars and drove past Dorothy’s house, honking and waving to Dorothy as she watched from her front lawn.

Many parade-goers then stopped in to give Dorothy a hug and some presents.

Shari Burdt, one of Dorothy’s stepdaughters, said that her family decided to throw a memorable birthday celebration for Dorothy—despite limitations brought on by COVID-19.

“The family wanted her to know how much she is loved and wanted her birthday to be a very special day,” Burdt said.

Dorothy Gramer, a Michigan resident for most of her life, was born on Aug. 3, 1920. She married her first husband, Tom Croull, sometime around 1950 and traveled with him while he was in the military.

Croull died from cancer in 1990. He and Dorothy were married for around 40 years and had no children.

A decade later, Dorothy met fellow parishioner and future husband-to-be Harry Gramer at Swartz Creek United Methodist Church. The pair hit it off almost immediately and were soon married in 2002.

“My mom always said she hit the jackpot when she married my Dad, who passed away seven years ago,” said Shari Burdt. “She never thought of any of us as stepchildren; we were just one big happy family.”

Dorothy worked at the Buick City plant in Flint as a secretary for many years before retiring in 1975. In her spare time, she performed with “The Million Dollar Babies,” an over-60 dance troupe that appeared at Christmas at the Whiting, the Flushing Follies and several other local venues. Dorothy and her husband Harry were also members of the Carman-Ainsworth Senior Citizen singing group, which performed all over the City of Flint.

Although Dorothy sustained a serious back injury a few years ago, family members said that she is still an active and stylish lady who loves spending time with her family and caretakers.