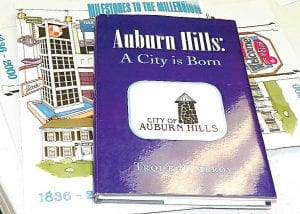 Information gathered by the Name Change committee includes this book written about Pontiac Township changing its name to Auburn Hills in 1983.

FLINT TWP. — A book chronicling the transition of the city of Auburn Hills from Pontiac Township was among items collected and passed around in the fact-finding phase of Flint Township’s latest quest to either become a city or change its name.

A Name Change committee met for the third time last week to talk more about how and whether to go forward. Besides the book, items brought to the table for discussion included information about costs, taxes, mailing addressees, insurance rates, state boundary requirements and general opposition.

Township Supervisor Karyn Miller stressed her neutral stance on the name-change question which has failed to win voters approval three times previously but was recently resurrected at a resident’s request. Miller discussed her meeting with an Auburn Hills officials and offered the book to anyone who wants to read it. She also provided information from the township attorney about past efforts to change the township’s name or legal status.

If the committee decides to move forward, the process will probably take a few yeas and ultimately would be decided by township voters, she said.

A few people attending the meeting opposed the change but did not elaborate. Others prefaced their support with stories about negative reactions when asked where they are from while traveling.

Committee member Mort Krasner, a long-time business owner, shared news clippings about the 1993 namechange effort including a meeting by the West Flint Business Association where the mayor of Auburn Hills spoke. Krasner still is active with the WFBA, a business networking group based in Flint Township.

Hughes addressed arguments about costs associated with a name change. In his research, he said did not find any correlation with millage rates and taxes increasing. As a city, the governing body would have the authority to impose an income tax but most small cities don’t, he said.

Hughes said the township’s current millage rates already are higher than some cities. As a city, Flint Township would have to provide services but also would directly receive state revenues for them.

“I have argued for years that we don’t get our fair share of that Genesee County Road Commission money,’’ Hughes said. “I believe that with the money in our hands, we would be in a lot better control of what we get for our dollars.”

Tracey Tucker, township economic enhancement director, also took a neutral stance but pointed out that a new name alone would not change the Flint mailing address for many residents. She also recommended checking legal requirements by the Michigan Boundary Commission that a city has contiguous borders. About 4,000 residents live in the southern part of the township including Pickwick Village and Colonial Village which are not contiguous.

Steven Philips, owner of Philips Insurance on Corunna Road, said he is the third-generation doing business since 1917. He cited good things about Flint such as its universities. He also gets negative reactions to Flint from people when he travels but refutes them.

“Part of the perception is up to us,’’ he said, adding that he is neutral about the name change.