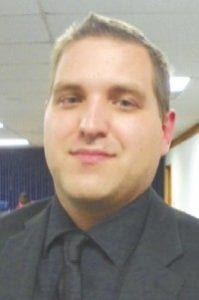 FLINT TWP. — Say hello to Sgt. Jerome Grzanka who was approved for promotion to the rank of sergeant Monday night by the township Board of Trustees.

He was named the highest eligible candidate for promotion by the Civil Service Commission at the request of Police Chief George Sippert in preparation for the retirement of another officer at the end of this month.

Officers have to have been in service a minimum of five years to be eligible for promotion, Sippert said.

Grzanka has been with the department since Jan. 15, 2008. He served four years and three months as a patrol officer before being assigned as an investigator for the detective bureau for the past year and two months, Sippert said.

As part of the selection process, Grzanka also took a written test followed by an oral interview with three commanding officers.

Grzanka is a graduate of the Macomb Police Academy and has an associate’s degree in law enforcement from Macomb Community College.

He received a Medal of Distinguished Service in November 2011 for heroic rescue actions taken at a house fire.

Trustee George Menoutes asked where Grzanka lives and Sippert responded that it is within compliance with regulations.

Grzanka was due to be sworn in Tuesday morning at the police station.