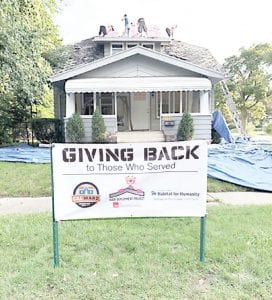 Throughout the year, Owens Corning Roofing and its network of independent Platinum Contractors, along with support from the Owens Corning Foundation, have been donating roofing materials and labor to replace roofing shingles on the homes of military veterans and their families.

“This is our second year working with Owens Corning’s Roof Deployment Project and we’re beyond honored,” said Pat Ward, President of C&L Ward. “Our whole team had an amazing experience last year, being able to give back to a local veteran, that we couldn’t wait to do it again and Mr. Hanson is very deserving of a new roof.”

Hanson grew up in Flint and served in the United States Army infantry from 2004 to 2011. After training in Georgia, he was stationed in Germany and Washington State before serving one-year tours in Iraq and Afghanistan.

Hanson’s military career was cut short from a gunshot wound he sustained while on duty. Upon leaving the army, he moved back to Flint, attended school in Big Rapids and bought a home in Mott Park.

But when repairs on his house became overwhelming, Hanson reached out to Habitat for Humanity for help. Through Owens Corning’s partnership with Genesee County Habitat for Humanity, he was selected and approved as the recipient for the roof replacement.

“Jason and his family sacrificed so much for all of us, it’s humbling to see how our community can come together for him,” said Thomas Hutchison, Home Repair Program Manager at Genesee County Habitat for Humanity. “It’s the collaboration of partnerships like this that truly make a difference.”

Hanson also received new windows in his home, thanks to a donation to Habitat for Humanity from C&L Ward.

“We donated an entire warehouse of windows and other materials to Habitat when we moved out of our location in Kawkawlin,” said John Scheick, marketing director for C&L Ward. “Habitat then took care of the window installation for this project.”

“We love to give back to the community anytime the chance presents itself, especially to a military veteran.” Scheick said.

For more information on Owens Corning’s Roof Deployment Project, or to learn more about how you can get involved, visit www.RoofDeploymentProject.com. You can also visit C&L Ward’s community involvement page at goclward.com to view its outreach initiatives.