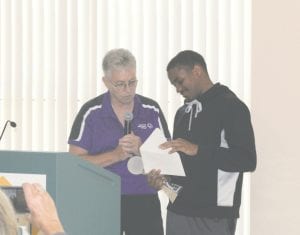 Special Olympian Dalvin Keller opens a letter after receiving his honorary ESPY, accompanied by volleyball coach Sheila Gafney, during a ceremony at the GISD Transition Center on Monday.

FLINT TWP. – After a gold medal performance for volleyball in the Special Olympics, and even being invited to ESPN’s annual ESPY Awards, Dalvin Keller returned home to much attention. He has been featured throughout the media, both locally and nationally, and at the Genesee Intermediate School District Transition Center on Monday, Keller received yet another honor.

He was awarded an honorary ESPY for his performance, as well as his enthusiasm and dedication to the sport of volleyball.

“Your performance at the 2015 Special Olympics World Games for the gold among among other successes is not only impressive but inspirational,” ESPN said in the letter. “This award recognizes your many achievements in sports and in your community. You are a true embodiment of an ESPN athlete.”

As for attending the ESPY Awards, Keller was thrilled to be a part of the ceremony. He was one of eight Special Olympics athletes to be asked to come up on stage during the event, which included a presentation from former first lady Michelle Obama.

“That was exciting to me,” said Keller. “I got excited and did something for my city and stuff; made my city proud. Being in front of the whole crowd, it was actually pretty fun to me. There was a time to be serious about something you do, so I put a serious face on and smiled proudly for my city.”

Dalvin has been a part of Special Olympic competition since 2012, when he began attending the Elmer Knopf Learning Center, which is operated by the GISD. He began to try any sport available to him, including his current sport of volleyball, as well as track, basketball, hockey and baseball.

His love for volleyball led him to being a part of the 2015 gold medal squad at the 2015 Special Olympics on a team based in Flint. He was presented the ESPY by Gafney, who spoke very highly of Keller and shared an emotional hug after presenting him the award.

He has seen quite a bit of coverage, including being featured on ESPN, and was thrilled during the ESPYs to meet Russell Westbrook, the Most Valuable Player in the National Basketball Association with the Oklahoma City Thunder, and who was also named Best Male Athlete that night.

For those looking to become involved in Special Olympic competition, contact Aaron Mills at 989-774-4393 or aaron. mills@somi.org.