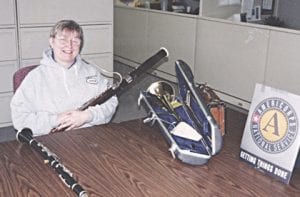 FLINT — During its Cinco de Mayo concert this weekend, the Flint Wind Symphony Ensemble will celebrate the career of one of its long-time members, bassoonist Patricia Legg.

Legg, a Flint resident, is about to reach her 50th year of membership with the ensemble. She joined the FWSE when it was known as the Flint Civic Wind Ensemble on March 25, 1969, and has been performing with the group ever since.

Originally growing up in the Pacific Northwest, Legg attended the University of Washington and played in numerous collegiate ensembles, as well as the Seattle Philharmonic Orchestra. Upon coming to Michigan, she worked at the Flint Public Library as a reference librarian in the Art, Music & Drama Department.

“The bassoon has provided me with the ability to sample a wide variety of music from large scale sacred works to jazz, musicals, opera and folk,” Legg said about her music. “My experience in Art, Music & Drama put me in close contact with a plethora of local musicians, organizations, businesses and students.

“My satisfaction comes from sharing my knowledge with others and assisting them in exploring music so they find their own delight and joy to pursue it further,” she added.

In addition to the FSWE, Legg has also performed with the Flint Civic Orchestra, the Town and Gown Orchestra and the Germania Orchestra in Saginaw.

The Flint Wind Symphony Wind Ensemble’s Cinco de Mayo concert will be performed at the Central Church of the Nazarene in Flint on May 5 at 3 p.m. The show will be free and open to the public, but freewill donations are encouraged.