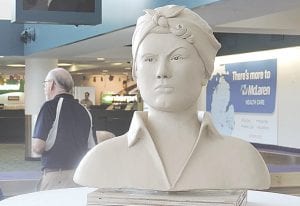 A fund drive is underway to add a bronze statue of Rosie the Riveter to heritage statues displayed in the Bishop Airport baggage claim area.

FLINT TWP. — A fundraising campaign is underway to produce a statue of Rosie the Riveter, the iconic symbol of working women during World War II, to be displayed at Bishop Airport alongside two other automotive legends.

The drive to raise about $60,000 was announced last week at a press conference by the Flint Women’s Forum (FWF) which has partnered with the Automotive Heritage Committee of Back To Bricks to produce the bronze statue of Rosie the Riveter. It will be displayed in the baggage carousel area when completed in 2019, joining similar heritage statues of Walter P. Chrysler and Charles Nash already on display there.

Rosie the Riveter was the star of a campaign aimed at recruiting female workers for defense industries during World War II, and she became the most iconic image of working women. These women sometimes took entirely new jobs replacing the male workers who joined the military. Rosie the Riveter is used as a symbol of American feminism and economic power. Rosie was based on a real person, Rose Will Monroe, who worked on the line as a riveter at the Willow Run Aircraft Factory in Ypsilanti Michigan.

The Back to the Bricks Automotive Heritage Committee chose the Flint Women’s Forum to help spearhead the Rosie statue because of their commitment to honoring, gathering, and celebrating women in the community. Both parties felt Rosie the Riveter embodied the perseverance and commemoration of the hard-working women in the Flint area and Michigan overall.

“We are honored to have been chosen to help lead this project and bring a Rosie the Riveter statue to Flint,” said Meagan Cooke, President of the Flint Women’s Forum. “Rosie represents the spirit of the American working woman. Her continued message coincides with our mission to help bring female leaders of the community together for purpose.”

In 2012, Back to the Bricks unveiled the first of several commemorative statues of important automotive pioneers including life size bronze replicas of David Buick, William C. (Billy) Durant, Louis Chevrolet and Albert Champion. Bronze replicas of Charles Stewart Mott grace the campus of the college that bears his name and a second version is located in the GM Automotive Pioneers Plaza in downtown Flint. A statue of Otto P Graff, one of the first auto dealers in Genesee County and a contemporary of the Auto Pioneers is also located in downtown Flint. These statues, created by local artist Joe Rundell, celebrate key leaders in business, industry, and labor whose vision, ingenuity, and determination became an integral part of the heritage and culture of the “Vehicle City.”

“The Back to the Bricks Automotive Heritage Committee is delighted that Flint Women’s Forum is taking on the responsibility to raise the funds for the only women statue in our overall Statue Project,” said Al Hatch, Chairman of the Board for Back to the Bricks, “Their partnership with us on this project has been invaluable.”

Anyone wishing to donate to the Rosie the Riveter Statue project can do so by sending a check made out to “Back to the Bricks – Rosie Fund” attention Business Manager, Mary Wood, 7377 New Hampshire Drive, Davison, MI 48423. All donations are tax deductible.