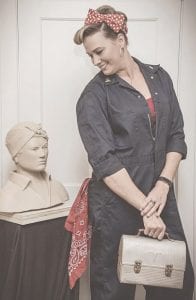 FLINT TWP. — Ask most young people who Rosie the Riveter was, and many will draw a blank.

Through the efforts of the Flint Women’s Forum (FWF), in its partnership with the Automotive Heritage Committee of Back to the Bricks, a third statue is in production to be placed at Bishop International Airport – this one representing Rosie the Riveter.

According to History.com, Rosie the Riveter was the star of a campaign aimed at recruiting female workers for defense industries during World War II, and she became perhaps the most iconic image of working women.

“American women entered the workforce in unprecedented numbers during the war, as widespread male enlistment left gaping holes in the industrial labor force,” said History.com. “Between 1940 and 1945, the female percentage of the U.S. workforce increased from 27 percent to nearly 37 percent, and by 1945 nearly one out of every four married women worked outside the home.” 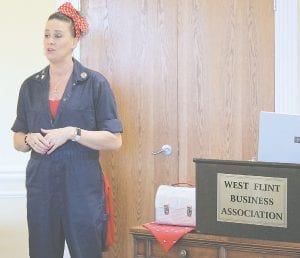 Amber Taylor, of the FWF and the model for the statue, recently spoke at the West Flint Business Association meeting, Sept. 19, and she said the group is still working on fundraising efforts to bring the Rosie statue to Bishop Airport.

Taylor, who is with E & L Construction Group, Inc. in Flint, said she took honor in being the model for the statue – she herself being something of a Rosie the Riveter. Taylor said besides now working in construction, her previous jobs included everything from operating forklifts to driving cars.

“My first job out of high school, I drove a 60,000-pound forklift and unloaded logs from a truck into a woodchipper,” said Taylor. “I would have never got that job without Rosie.”

Taylor told the WFBA that to her, Rosie stands for progress, independence, women’s rights and patriotism.

“She changed all your lives,” said Taylor. “It wasn’t common to see women in the workplace; they were mainly men’s positions. Women, in commercials on the radio, were portrayed as barefoot in the kitchen, taking care of their families.”

With many men off fighting in the war, women answered the call for help when the nation needed workers to build weapons to fight against the Germans and Japanese. The real “Rosie the Riveter” was one of those women.

History.com said it is not known for certain who Rosie was, but it is believed by many she was Rose Will Monroe, who worked as a riveter at the Willow Run Bomber Plant in Ypsilanti. Monroe also was featured in a promotional film for war bonds.

Taylor said the reason for a statue at Bishop Airport is Rosie represents the qualities of resilience, perseverance, hard work, sacrifice and determination, all qualities the Flint Women’s Forum advocates for today.

There is only one other full-scale Rosie the Riveter statue in the country and the FWF said placing it at Bishop Airport, along with statues of auto industry pioneers Walter P. Chrysler and Charles Nash, is appropriate because Flint is the birthplace of the automobile industry, which was crucial in the war effort back in the 1940s. It is also a major hub for air travel, she added.

The artist creating the statue is Joe Rundell of Flint, who has created a number of statues displayed at Bishop Airport and around Flint.

The project got underway when Back to the Bricks approached Flint Women’s Forum in November of 2017. The project was approved the following May. So far, Taylor said, she has spoke to 12 different groups in the community to garner support for the project and so far has raised about $22,000.

“These statues go for about $150,000 and Rosie is about $43,000 for Rundell without making any profit,” Taylor explained. “There is no maintenance fund yet for these statues, so part of our fundraising efforts are to establish a maintenance fund.”

When the statue is finally unveiled, Taylor said Willow Run plans to bus every “Rosie” they can find from World War II to Bishop Airport for the event.

“We want those stories too,” said Taylor. “If you know a Rosie or have one in your family, please direct her to us.”

Sponsorship opportunities are available by contacting the Rosie the Riveter Project, P.O. Box 500, Flint, MI 48501 or contact Taylor at 810-877-8383 or email at tayloramberL.88@gmail.com.