Flint’s Capitol Theater is now open to the public 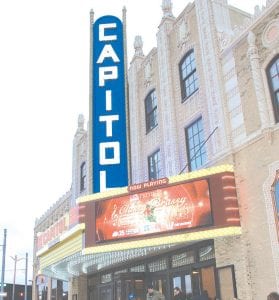 The exterior of the newly refurbished Capitol Theatre in downtown Flint.

FLINT – The city’s historic and ornate Capitol Theater in Flint, an “Italian Renaissance”-style movie house and art venue built in 1928, reopened its doors last Thursday after being closed to the public for 20 long years.

The $37 million renovations were made possible through a collaboration between nonprofit Uptown Reinvestment Corporation and the Whiting Auditorium.

The restoration project, according to the Michigan Economic Development Corporation, could generate upwards up to $31.4 million in capital investment and create 82 full-time jobs. Tim Herman of the Uptown Reinvestment Corporation said opening the theater is part of citywide plan to begin revitalizing Flint.

Inside the upper portion of the Capitol is 1,600 seats, hand-painted ceilings and twinkling LED lights made to look like one is gazing at the stars during a performance. The basement space contains a lobby and multi-purpose “Black Box” room equipped with sound panels on the walls. Jarrett Haynes, executive director at the Whiting, said the basement is reclaimed space that was used to store mechanical equipment.

“We’ve stayed within the footprint of the building, yet we’ve been able to outfit it with additional performance space, additional event space and additional service space,” said Haynes. He added the basement could operate as a rehearsal area, lounge and a place to hold meet-and-greets with performers postshow.

“We’ve been through some challenging times, but things are turning around,” said Weaver during the ceremony.

All of the original architecture to the building is still intact with an additional 25,000 square feet of office space. Construction for the project began in 2016.

The Capitol Theater received $5.5 million performance-based equity investment from the Michigan Community Revitalization Program (CRP) in February of last year, along with grants from the C.S. Mott Foundation and the Michigan State Housing Development Authority amounting to $15 million and $500,000, respectively. The Community of Greater Flint has also approved a $1 million loan for the project.

I do remember. I met my husband, Richard Winters, (Yes, the same one who, with his buddies, maintained the Davison Playscape for nearly 20 years,) at Flint Central High School in 1950. Movie date nights were always at the Capitol Theater. We married in 1955 and had three sons. When a Disney movie came to town, it was always shown at the Capitol Theater. Mothers like me would take our 5, 6, 7 year old children “downtown” and stand in line from the theater box office back around the corner and down Harrison Street waiting to get into the theater. It was always a magical place. Of course, those were the days when we took our children “downtown” to have their pictures taken with Santa at Smith-Bridgman’s Department store. Downtown Flint was where things happened. I went to the open house at the Capitol last evening and it is pretty much like the theater that I remember. The Ladies Lounge was plusher in the old days and they took the birds out of the sky, but I was still happy to see what a good job had been done in the restoration. Old timers like me have been waiting a long time for someone or some organization to step up and bring the Capitol Theater back to life. – Norma Winters, Davison