Flint’s Oulahen on coaching staff of Under-18 Team Canada 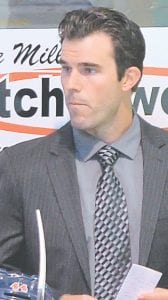 CALGARY – Flint Firebirds’ head coach Ryan Oulahen will now have yet another accolade to add to his resume. Oulahen, a former Detroit Red Wings’ prospect, will be a member of the Canadian National Summer Under-18 Team’s coaching staff.

The U-18 team will compete in the Hlikna Gretzky Cup from Aug. 6-11 in Edmonton and Red Deer. Giles Bouchard will be the head coach while Oulahen and Mitch Love have been named assistants.

The competition will showcase the best under-18 hockey players from all over the world and is the premier tournament for doing just that. It has been around for 27 years and Canada has worn the gold medal an impressive 21 times.