By Paul Costanzo
Special for MHSAA Second Half 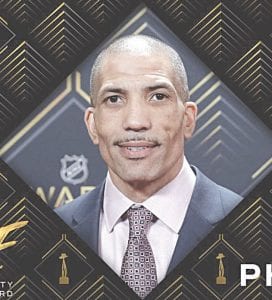 It was the easiest way to kill nerves that went along with having to speak in front of a room filled with NHL superstars and legends, as well as a national television audience.

But as the award was about to be announced, and a video montage started playing on the screen, the realization he could win started to come back to Phillips. Then O’Ree said his name.

“When I watched Willie O’Ree say my name, it was like this snapshot of time froze, and I was like, ‘No way,’” said Phillips, an MHSAA hockey official and the founder of the Flint Inner City Youth Hockey Program. “I embraced my wife. She has been the person that has been the best advisor to me, and to have her here with me was an incredible moment.”

Phillips was honored for founding and directing his organization, which has given a cost-free opportunity to play the game to about 150 kids ages 8-11 in Flint since 2010. He was one of three finalists, along with Tammi Lyncy of Washington, D.C., and Anthony Benavides of Detroit.

Fans submitted candidates for the award, and the field was whittled to the final three who were then voted on by the public.

The award is named after Hockey Hall of Famer O’Ree, who broke the NHL color barrier in 1958, and who has worked as the league’s diversity ambassador for more than 20 years. It is given to “an individual who – throughout the game of hockey – has positively impacted his or her community, culture or society,” according to a release from the NHL. This was the second year it has been awarded.

“It was surreal, would be the first word,” Phillips said. “I felt an incredible honor – having just met Willie a couple months ago in person, he brings with him this magic. To look over and hear him say my name, it was like, ‘I can’t believe this is happening. Willie O’Ree – Willie O’Ree! – in giving me this award.”

Those who know Phillips could certainly believe it was happening, and that it was a well-deserved honor.

“I wasn’t surprised; I thought if anybody deserved that award, it was Rico,” said Steve Berriman, who serves as assigner and referee-in-chief for the Flint Ice Hockey Referees Association. “I was so darn proud; it was so well deserved. He’s immersed himself in the hockey culture. Whatever he’s accomplished has been all on Rico. He’s done it all himself. From where he’s started to where he’s come, and then the starting of this program, it’s 100 percent on him.”

Phillips, who is a firefighter in Flint, was introduced to the game during the 1980s and fell in love with it. He served as a student trainer for the hockey team at Flint Southwestern, and thanks to plenty of time spent with the officials while in that position, was convinced to get onto the ice wearing the stripes. He became an MHSAA registered official for ice hockey beginning with the 1990-91 season.

“I took up that challenge, and it was terrible at first, because I could barely skate,” Phillips said with a laugh. “One of the other challenges, besides learning how to skate, is that I was met with racial slurs and taunts. I was young, and it was tough. I thought, ‘What did I get myself into?’ I had some people who helped talk me through it.”

Phillips said those mentors explained to him that quitting would give those who taunted him what they wanted, and more than 30 years later, he’s still on the ice. He said he officiates about 40 high school games per year and has worked three MHSAA Semifinals and a handful of Quarterfinals.

It was during the late 1990s that the idea for the Flint Inner City Youth Hockey Program came to Phillips.

“As a hockey referee, in particular, it wasn’t just playing, I know the lack of cultural diversity (in hockey),” Phillips said. “It didn’t bother me, so to speak. But I thought, you know what, there’s something that can be done about this.”

About a decade later, he put the wheels in motion and went to the Flint-based Perani Hockey World to ask for financial assistance. Perani took things a step further, offering to outfit all of the players from head to toe, giving Phillips and his organization 54 sets of gear in total in the first year.

After that first year, a funder fell through. But four years later, the United Way stepped in and provided funding to pay for ice time. The Flint Firebirds of the Ontario Hockey League have since stepped in to assist with ice time.

“One of the things I appreciate about our program is that it’s a community collaborative effort,” Phillips said. “These folks give to us without a non-profit status.”

Since its inception, Phillips said that the program has served about 150 players. Each player not only receives gear and instruction at no cost, but also transportation to and from the arena.

“We have 12 that went on to continue playing hockey, which is huge,” Phillips said. “I’m very proud of that – I didn’t expect that. We help and seek out additional funding for our participants that come through to help with the cost as they move on. The kids that come to our program, they don’t understand or know about hockey or even ice skating. We’re taking these families and teaching them to love this sport.”

Phillips has been saddened by the decline of the sport in the Flint area, saying that when he began officiating there were more than 20 high school teams in the area, and now there are fewer than 10. He said he also struggles to fill his program each year.

He hopes that will change with the exposure that has come with this award.

“What I’m hoping is this opens up the doors a little more, that this brings some gravity,” Phillips said. “On the flip side, when talking about funding, (since he was announced as a finalist for the award) I’ve had owners of pro teams and others coming up to me saying, ‘We’re going to send you equipment and send you some funding.’ ”