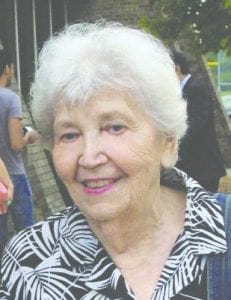 Mrs. Fields was born in Florence, AL, on May 25, 1925, to Raleigh and Geneva (Jones) Chrysler. She was retired from GM and then greatly enjoyed working at the Michigan Renaissance Festival until December of 2016. She loved knitting and had knitted thousands of hats, scarfs and baby hats for Lighthouse.

She was preceded in death by her husband, Charles James Pompee.

Memorial donations may be made to Renaissance Rescue.

Memorial services will be held at 11:30 a.m. Tuesday, September 5, 2017 at the Dryer Funeral Home, Holly. Visitation will be from 9:30 a.m. until the time of the service on Tuesday. www.dryerfuneralhomeholly.com