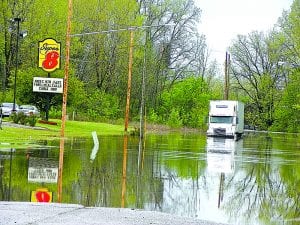 FLINT TWP. — The I-75 freeway at the I-69 over pass was closed several hours Friday morning due to flooding.

But flood waters were receding and sections on I-69 and I-75 were reopening as of about 3:30 p.m. with some exceptions, according to an update from MDOT.

Traffic updates and alternate routes are posted on highway DMS (electronic) boards. Emergency crews were on the scene all morning attempting to get the water to recede and to aid or redirect stranded motorists.

Traffic was backed up on heavily-traveled Miller and Corunna roads due to being rerouted off the closed freeways. Yellow police tape stretched across Ballenger Highway, just south of Miller, forced cars to turn around and seek another route. Miller Road itself was hit by flooding just east of the I-75 exchange in front of the Town & Country Bowling Alley. 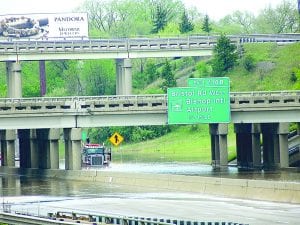 R.J., manager at the Super 8 Hotel on Claude Ave. said when she arrived at work about 9:15 a.m., she had to park elsewhere and walk in. The parking lot in the hotel was flooded and impassable until about 3 p.m., she said.

There were unconfirmed reports of extensive neighborhood flooding. Several neighborhood streets off Graham Road were badly affected. Two cars in a driveway at the corner of Graham and Beveridge road were standing in water up to the doors and the yard was totally flooded.

Similarly, the low-lying entrances to Arlene Drive, Hogarth Avenue and Clairmont Street off Graham Road all were heavily flooded and appeared to be impassable.

Residents who needed to go somewhere dry were invited to come to the nearby Flint Township Senior Citizens Center, which is a designated flood relief center. But center officials said they only were seeing the usual crowd at the center except for visitors from the Burton Senior Citizens Center which was closed due to flooding.

Center director Linda Moore said she was 15 minutes late opening the center due to flooding-related traffic problems but other than that it was business as usual.

All Carman-Ainsworth schools were closed.