Flowers for you, mom 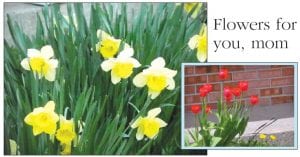 Whether plucked from the yard or bought at a florist, flowers are one of the most popular traditional gifts given on the day in May set aside to honor mothers. Of an estimated $20.7 billion that American consumers will spend this year for Mother’s Day, about $2.3 billion will be spent on flowers, $4.2 billion on jewelry and $3.5 billion on a special outing such as brunch or dinner, according to an annual spending survey released by the National Retail Federation.