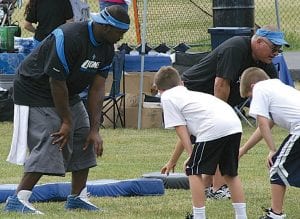 GRAND BLANC— Kids turned out in big numbers for the Detroit Lions’ youth football camp on the Grand Blanc High School practice field on Monday, the only camp locally for kids in Lapeer and Genesee counties. The local youth got the chance to polish their football skills while learning several techniques from Lions’ defensive lineman Andre Fluellen.

“I’ve come out here before. I think I did a camp out here maybe two or three years ago,” said Fluellen. “It’s just a place where they treat me right, and the coaches have come out here and treated me right, so I’ve kind of got a connection with them. I know there’s a few (other Lions’ camps) kind of upstate, and I don’t know where all of the other ones are, but I know they’ve been doing this one (in Grand Blanc) for a few years now.”

The kids that showed up ranged in age, size, skill level, and in a few cases, gender, as well.

“I think it’s for all age groups,” added Fluellen. “It’s not a (specific) age group, and they even had some girls out here, so that was pretty cool for us. Any kid is pretty much invited to come out here. I don’t think there is a fee to participate. I think it’s just put on by Play 60 and youth football, so I know that it’s geared to pretty much be available for all kids.”

During a water break, some of the kids nervously approached Fluellen for an autograph, which he was happy to sign for the kids. Eventually, Fluellen was surrounded by the star struck kids, which led to the coaching staff having to hold off on the rest of the autograph session until the camp concluded, as they scattered back to their respective position groups.

The camp, although mainly focused on football skills, also instills lessons that the young athletes can take on with them throughout their lives.

“More than anything, is just hard work,” commented Fluellen. “It’s just doing the right thing and listening to your coaches and things like that. The fundamental and football part is there, but at the same time, we’re trying to teach life skills, too.”