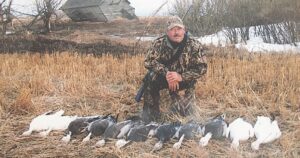 Flushing native Barry Pratt on one of his many hunting expeditions. Photo provided

FLUSHING — For 50 years, Flushing native Barry Pratt has traveled to many of North America’s most scenic wetlands to hunt waterfowl and enjoy the great outdoors.

Now, he’s sharing his experiences with the world.

Pratt will be holding a signing for his new book called “Born of the North Wind” at Flushing United Methodist Church, 413 Main St., from 2-4:30 p.m. during the Flushing Harvest Festival on Sept. 25.

“Born of the North Wind” is a collection of 30 short stories chronicling Pratt’s numerous hunting expeditions across 14 states and three Canadian provinces. Most of the stories are about waterfowl hunting, but some also deal with Pratt’s life experiences—some funny, a few sad.

Lighter moments from Pratt’s travels are included in chapters like “Beer Can GPS,” which details Pratt’s system for using beer cans to mark out hunting areas; and “Almost Famous,” in which Pratt expresses his regret for turning down an invitation to go on a duck hunt with Phil Robertson of “Duck Dynasty” fame in the 1970s.

“It’s like a ‘chicken soup book’ of my hunting experiences and the trips and destinations that I’ve enjoyed,” Pratt said. “It’s the kind of book that keeps you enjoying hunting during the offseason.”

Pratt, 68, self-published “Born of the North Wind” in 2020 but decided to hold off on planning a book signing or promotional event until now due to the COVID-19 pandemic.

Although he hunts across the country, Pratt’s travels also take him frequently to the Saginaw Bay and northern Michigan and sometimes for a field hunt or two in Genesee County. He also works occasionally for the Michigan Department of Natural Resources (DNR) to help maintain waterfowl gaming areas.

“The wetlands are a resource for all of us to enjoy—bird watchers, hikers and hunters,” Pratt said. “Waterfowl hunting provides great exercise, and it’s a wonderful sport that’s filled with lots of fresh air and fun while spending time with family and friends. It’s classic man versus nature stuff at times too, and it’s a great way to build character.”

Pratt’s book can be purchased for $20 at the book signing or $25 through shipping. Contact Pratt at ducknut@sbcglobal.net for more information about payments.