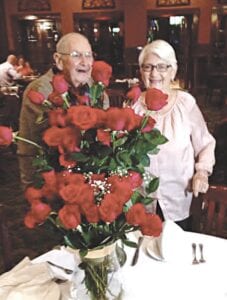 FLUSHING — Former Flushing A&W owner Lawrence “Larry” Melancon is being remembered for his tireless work ethic and the caring attention he paid to staff and customers alike.

Melancon, 93, passed away at his Burton home on Dec. 21. He is survived by his bride of 75 years, Christine, and by his five children, 12 grandchildren and 14 great-grandchildren, as well as their spouses and significant others.

In 1970, Melancon brought an A&W franchise to Flushing and built it on 200 S. Cherry Street near the downtown area. The restaurant, which transitioned to become the Flushing A in the late 2000s, continues to be a staple in the Flushing community, serving old-fashioned hamburgers, hot dogs with the iconic A&W red sauce, coneys and root beer.

From 1970 to 1976, Larry Melancon directly oversaw operations at both the Flushing A&W and another A&W he owned in Mt. Morris Township. Larry’s sons Rob and Scott Melancon, who grew up working in the family business, said that their father kept his restaurants meticulously clean and well-run and routinely did a lot of the “everyday” work himself. 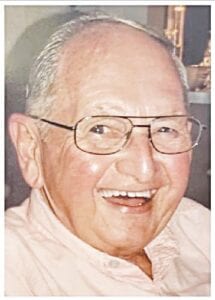 “My Dad loved the restaurant business,” said Rob Melancon. “He would do everything, from running the machines, to sweeping up the parking lot to washing windows every day. He was always up front with customers and employees.”

Even after retiring from the day-today operations of his restaurants, Larry Melancon continued to pitch in and help any way he could at his two A&W locations.

“My father went from being the ‘president of the company’ to becoming the maintenance man,” said Scott Melancon, who now owns and operates the Flushing A. “He would come every Monday morning and clean the root beer lines, and when we had car cruises, he would come out and wash dishes in the back.”

Larry Melancon’s dedicated work ethic began as a child when he took on a newspaper route and later an ice cream route to help his family during the Great Depression.

As a young adult, Melancon was such a dedicated employee of Standard Cotton Company in Flint that he even worked on his own wedding day—up until just a few hours before the ceremony, according to family members.

When Melancon was laid off from Standard Cotton, he walked the streets of downtown Flint to look for work and landed an apprenticeship at the Wethered-Rice jewelry store. Eventually, Melancon worked his way up to become a partner at the store.

In 1965, Melancon left Wethered-Rice to purchase his first A&W restaurant on the corner of Clio and Pierson roads in Mt. Morris Township. He owned that location until it closed in 1998.

While hard work was important to Melancon, he also valued opportunities to talk to customers and mentor young people—particularly teens who worked for him or frequented his restaurants.

“Anybody who was looking for advice or comfort went to my Dad,” said Rob Melancon. “If an employee was having problems at home, he would talk to them in his office when they got off work. He would always say ‘everybody’s got something good in them. Just look for it.’”

Throughout his lifetime, Larry Melancon strove to give back to those in need, whether it was paying an energy bill for an employee or opening schools in Haiti while on missionary trips. According to his sons, Melancon was one of the first people to donate funds toward the construction of St. Jude Children’s Research Hospital in Tennessee.

Melancon and two other local men also funded the building of Judson Baptist Church in Burton.

To honor his philanthropic legacy, Melancon’s family has requested that charitable donations should be made in his memory in lieu of flowers. Donations can be made to Judson Baptist Church, St. Jude Children’s Research Hospital or the charity of your choice.