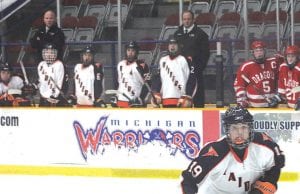 Jon Jepson (back left) watches on as his Flushing hockey team takes on Swartz Creek last season at Perani Arena, home of the Michigan Warriors, which Jepson will now assist.

FLINT— We often see several changes to the high school hockey programs in our area, most involving new co-op programs between multiple schools. One of those co-op programs will look a bit different next season, but not because of a new co-op agreement. Flushing/Carman-Ainsworth head coach Jon Jepson will be moving on to coach as an assistant for the Michigan Warriors of the North American Hockey League this coming fall, effectively forcing him to step down from the Raiders’ program.

“Unfortunately, I had to step down as the coach for Flushing,” said Jepson. “There would just be no possible way I could do both, time and energy wise. It was a great two years with the team. I am very excited about this opportunity and to be able to coach under Moe Mantha who played in the NHL for 12 years and has coached at the highest of levels.”

The Michigan Warriors have been based at Flint’s Perani Arena since they made the move from Marquette prior to the 2010-11 NAHL season. During their inaugural year, the Warriors fought back against all odds and made it to the championship game. This past season, however, despite clinching a playoff berth on the last day of the regular season, the Warriors just couldn’t live up to the expectations set by their predecessors.

“I decided to move on to coaching at the junior level because it is a chance for me to coach at the highest level,” added Jepson. “Getting to coach under Moe Mantha, who has coached and played at every level there is, including many years in the NHL is an opportunity that you just don’t pass up.”

Jepson, who also plays a key role in the operations of Flint Iceland Arenas, has been behind the bench, in one form or another, for eight seasons, and will be entering his first year of coaching at the junior level.

“I will still be running Iceland Arenas while I am coaching the Michigan Warriors,” stated Jepson. “I was able to be the one to break the news to the Flushing kids before the hiring became public, so that was good and I think they took it well. They all want to move up in their playing careers and I think they realized that this was a chance for me to move up. They congratulated me, and I thanked them for two great years.”