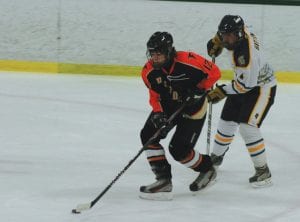 Flushing/Carman-Ainsworth’s Garrett Schafsnitz will help lead the team as a senior defenseman this season.

FLINT TOWNSHIP — The Flushing/Carman-Ainsworth co-op hockey team has had some competitive teams over the past few seasons. However, this year’s squad will have a new look in what may be their final season as a co-op. With Flushing leaving the Saginaw Valley League for the Flint Metro League next fall, the two schools will have to separate if they intend on competing for league titles.

The Raiders had high hopes for last year with so many seniors on the roster, but an early playoff exit put an end to that run. This year’s roster is going to look vastly different following the departure of nine seniors, including defenseman Sam Berry, forward Dewey Miller, defenseman Daniel Olson, forward Andrew Sanborn, forward Billy Yager and forward Cameron Bruff.

“We don’t have a goalie,” said coach Ben Guzak. “We have a kid that just came the other day. He’s never played goalie before. We’re trying to locate gear for him.”

Although the goaltending situation is in a tough spot, Flushing looks forward to the return of senior defenseman Garrett Schafsnitz, senior forward Wes Livingston, sophomore forward Trevor Sauve and junior forward Joe Montpas, who really came into his own a year ago alongside his now departed older brother.

The Raiders have also brought in another key piece to the mix with the addition of former travel hockey player Austin Phillips.

“We’ll just call it a rebuilding year,” added Guzak. “We’re very young with a new goalie. It’ll be an interesting year. We’re just going to try and get better every day and, like I said, rebuild for the future.”