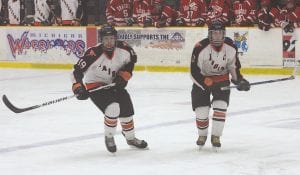 Flushing/Carman-Ainsworth’s senior Drew Sanborn (19) returns to the Raiders this season while Hunter Miller (17) has graduated. The Raiders will look to build on last season’s success under new coach Ben Guzak.

FLUSHING — Flushing and Carman-Ainsworth will continue to join forces on the ice this year, where they saw a great deal of success just a season ago. Several of those players have graduated from high school, leaving the Raiders with a few holes in the roster. Although their roster may be a bit shorthanded, new coach Ben Guzak is confident that his squad will work hard enough to fill those voids.

“We had a bunch of seniors that graduated this year,” said Guzak. “We have seven seniors this season that will lead our hockey team and I expect all of our seniors to contribute to the team. We have a pretty short roster, only 13 players, but they really make up for it with heart.”

During the off-season, the Raiders graduated forward Matt Nagy, defenseman Michael Livingston, forward Hunter Miller, defenseman Nick Brazeal, defenseman Joseph Anderson, forward Kevin Wilson and goaltenders Chad Bundy and Casey Bradshaw. That’s a lot of talent to fall from your roster in one year. However, there’s still plenty of power left for Flushing/Carman- Ainsworth to make some noise this season. 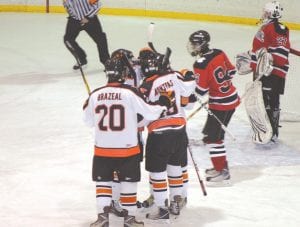 At right: Nick Brazeal (graduated), Mickey Montpas, back this season as a senior, celebrate with teammates after a goal is scored against Grand Blanc at a home game at Flint Iceland Arenas.

A pair of seniors that made a huge impact as juniors a year ago, forwards Jordy Makranyi and Mickey Montpas, will be back to add some more offensive firepower to the Raiders’ arsenal. Dewey Miller, Daniel Olson and Drew Sanborn will also be expected to contribute to Flushing/Carman- Ainsworth’s success this season.