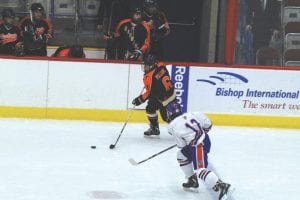 Flushing/Carman-Ainsworth’s Gavin Williams drives the puck through the neutral zone during the season opener against KBH United.

FLINT TOWNSHIP — In their first home contest of the 2013-14 season, the Flushing/Carman-Ainsworth co-op hockey team hit the ice at Iceland Arena against Swartz Creek/Clio en route to a 10-1 loss.

Flushing would find the back of the net once in the first period, however, after that it would be all Dragons.

Swartz Creek/Clio recorded six goals in the opening period of the game before adding another four tallies in the second stanza to close the game out on a mercy rule. Jeff Fisher scored Flushing’s only goal and Tony Bryan made 20 saves in net for the Raiders.

Zach Atwell led the Dragons with three goals and Connor Houle and Carter Compton each added a pair of their own. Nick Lajoie had a goal and three assists and Brandyn Matte added another tally.

The Raiders opened the season last Wednesday on a tough note at Perani Arena in Flint, falling to Kearsley/Brandon/Holly United, 12-3. KBH crafted a 4-1 lead following the opening period before forcing the game to end in a mercy after totaling eight goals in the second period to Flushing’s two.

Joe Montpas led the Raiders with a pair of goals, including the game’s first tally. That, however, would be the only lead Flushing built in the opener. Austin Phillips was responsible for the lone other Flushing tally and Trevor Sauve had two assists while Wes Livingston and Cliff Ogle each recorded a helper.

On the KBH end, Shawn Larsen recorded a hat trick and added a pair of assists to the effort while Kenny Kross picked up two goals and four assists. Brendan Guziak had three goals and three assists, AJ Yuchasz scored two goals with one helper, Nate Flanagan totaled a goal and an assist and Kirk Wells added another score.

Now at 0-2 thus far on the young season, the Raiders traveled to Saginaw Bay Ice Arena following our Wednesday deadline for a game against Freeland/Saginaw Nouvel/Valley Lutheran, otherwise known as FNV Griffins, before facing the LakeVille/North Branch/Dryden/Goodrich Alliance on Saturday at the Polar Palace in Lapeer.