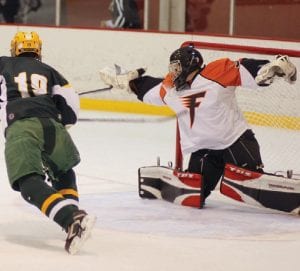 FLINT
— A very determined Flushing squad set aside the Lapeer East hockey team, 10-2, at Flint Iceland Arenas last Saturday. At one minute into the third period, the mercy-ruled game was called in favor of Flushing.

Matt Nagy started a fivegoal run for Flushing in the first period at 13:36 assisted by Mikey Montpas and Michael Livingston. At 10:17, Geordi Makrani scored assisted by Joe Anderson and Nagy. Dan Olson then scored his first varsity goal at 5:37 off a pass from Josh Williams to put the Raiders up by three goals. Nagy scored again at 2:45 assisted by Blake Schafsnitz and Hunter Miller and then finished off the first-period scoring with 29 seconds left from Montpas and Schafsnitz.

That left the Eagles in a deep 5-0 hole that quickly grew to 6-0 when Nagy scored at 13:07 assisted by Drew Sanborn. The Eagles would finally get on the scoreboard with a Nick Pullano goal at 12:40, but Flushing bent the net twice more, at 10:00 off the stick of Montpas from Makrani and Sanborn. Williams got in on the action again at 8:35 with a shot from Makrani and Levi Selvig. East got its second goal of the night from Steve Tadazak at 1:49 assisted by Tyler McCleary, but still trailed, 8- 2.

Flushing sealed the deal with two more goals in the third, while East was unable to capitalize on any scoring opportunities. Montpas scored unassisted at 13:34 and Montpas scored at 13:25 from a pass from Miller and Anderson.

On Friday, Flushing edged the Eastside Stars of Lansing, 6-4, in Lansing.

Lansing opened the scoring at 5:28, then Makrani got the scoring started for Flushing with a solo goal at 3:03, followed by Sanborn’s assisted goal by Nagy with 35 seconds left in the first period.

In the second, the momentum remained in Flushing’s favor for a short time, with Nagy scoring at 10:57 assisted by Schafsnitz. At 10:08 Nagy returned the favor with a feed to Schafsnitz at 10:08, then the pendulum shifted to Lansing’s favor with goals at 5:37 and 1:05.

Lansing continued to slip goals past Flushing with one at 4:41 to tie things up, but Makrani wanted no part of a loss and scored assisted by Sanborn at 3:58, then Nagy got the game winner unassisted at 3:33.

“I still think we are very sporadic,” said Flushing coach Jon Jepson. “We play very good in spurts and then at other times we get running around. But the boys work very hard. On Friday we had a 4-1 lead and we let them tie it, but picked it up and Makrani put the team on his shoulders for one shift and was not going to be denied and put us back up. Then his line came back and scored 20 seconds later.”

Jepson added, “We played very good defense the rest of the game. We have great senior leadership from Matt Leland, Williams, Schafsnitz and the other seniors. The guys are really starting to buy into the program. Saturday we play Swartz Creek, so that will tell us really well what kind of team we are going to be. It’s a big In house rivalry to contend with along with the game itself.”