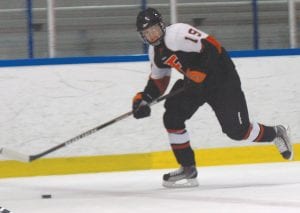 Flushing/Carman-Ainsworth’s Drew Sanborn made his way down the ice on a breakaway.

Neither side would score in the first period, but Creek would go up on its rival, 4-1, before getting a little complacent and undisciplined, letting the Raiders back into the contest.

Creek’s Nick Webb would score the first goal of the contest at 7:54 in the second period assisted by Jacob Veenhuis and Antonio Schippono.

Veenhuis followed with a goal at 3:04 assisted by Derek Makimaa and Webb. Flushing got on the board in the final seconds putting one between the pipes at the :22 second mark off the stick of George Makrani and Michael Montpas.

Veenhuis scored at 14:12 in the third off a feed from Makimaa and Webb, then Schippono scored at 13:18 assisted by Makimaa and Jared Trebtoske. Flushing answered back at 12:55 off a Matt Leland solo goal, then Makimaa scored for Creek at 11:03 on his own solo goal.

Flushing’s Montpas scored at 9:10 assisted by Blake Schafsnitz, then got a little closer than Creek coach John Badal wanted with Leland scoring at 3:24 assisted by Montpas and Joe Anderson.

“It was a good rivalry game,” Badal said.

“We were up 4-1 on them and we got undisciplined with nine penalties and let them back in. They took eight penalties, so both sides came undone a little.

Badal noted that the stronger teams this year seem to be leveling out and slowing down while the teams that are struggling teams are coming on stronger. It’s a bit of a wake-up call for the teams that perhaps are getting a little too complacent with strong wins, something the Dragons were reminded of as Flushing came back strong on them in this one.

“It’s making for some really interesting hockey so far this season,” Badal added.

Flushing is back on the ice Saturday at 5 p.m. hosting Haslett, then is off for the Christmas break.