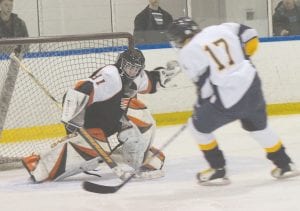 LAPEER
– After pulling out to a 4-2 first period lead the Lapeer West hockey team was shut out the remainder of the game by the co-op Flushing/Carman-Ainsworth squad that took the 9-4 win at the Polar Palace last Saturday.

West would score three goals within the first 5 minutes of the game, with Braydin Walters lighting the lamp at 14:05 assisted by Mike Fearson and Brad Szczesny. Danny Delvecchio then scored on an assist by Steve Gallant at 11:43 then Mike Bommarito slipped in a solo shot at 10:34.

Flushing was not flustered, though, and began to unleash its sticks with a solo goal at 6:25 by Jeff Fisher, then at 1:52 Jordy Makrani scored the Raiders’ second goal assisted by Drew Sanborn and Hunter Miller. Fisher, a freshman, scored his first varsity goal.

The second period showed Flushing displaying its scoring prowess with four unanswered goals. Josh Williams scored at 11:45 assisted by Daniel Olsen and Fisher, then Makrani got his second goal on a shorthanded shot assisted by Matt Nagy at 7:49. Matt Leland got in on the action with a power-play goal at 2:35 assisted by Joe Anderson and Miller, then again at 2:18 getting the feed from Mike Livingston and goalie Casey Bradshaw.

The Panthers were unable to solve the riddle in the third period, while Flushing kept its hot streak going with three more goals. Anderson scored at 14:21 on the powerplay with assists going to Blake Schafsnitz and Mickey Montpas. Sanborn scored his second goal assisted by Makrani and Nagy at 11:07 and Montpas sealed the win on a powerplay goal at 9:04 with the assist going to Leland.

“I was very pleased with play in second and third period,” said firstyear coach Jon Jepson. “The first period I think was nerves or just getting used to new coach and new players, but we were just a step behind them in every aspect.”

Jepson added, “They took it to us right within the first five miutes. We made some costly mental errors, but I was very impressed that we fought through it and showed the boys’ maturity coming back from down 3- 0.”

The win was Flushing’s first in its season opener, while West slipped to 1-2 overall, 1-0 Flint Metro.

Next is the Ludington Thanksgiving Tournament Friday with Flushing to play Kalamazoo at 8:30 Friday night. Consolation and championship games are Saturday.