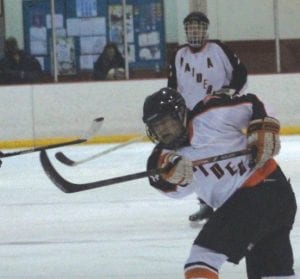 FLINT TOWNSHIP — It was a tough Saturday night for the Flushing/Carman-Ainsworth co-op hockey team, taking their second consecutive loss against a Flint Metro League squad, falling, 9-2, to Swartz Creek/Clio at Iceland Arena.

Brandyn Matte would be the first to score, giving Creek a 1-0 edge before Connor Houle extended its advantage. Collin Mantei then rippled the mesh on back-to-back occasions to make it a four-goal contest.

Zach Atwell would be the next Dragon to add to the scoreboard before Mantei converted one more to earn the first-period hat trick.

Down, 6-0, the Raiders finally broke the shutout as Joe Montpas ripped it into the back of the net in the second period before Matte got one back to make it a 7-1 game after two frames. 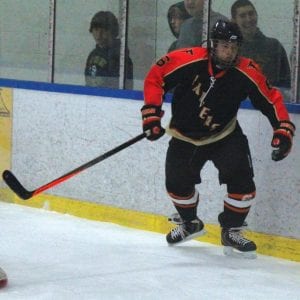 Gavin Williams circles around behind his net.

Brian Knack and Houle each scored in the third period to give the Dragons a massive 9-1 lead. The game’s final tally was from Mark Tyven, cutting the Creek advantage to the eventual final, 9- 2.

Jeff Fisher stopped 44 of the 53 shots he faced in net.

The Raiders battled in one of their closer games of the season last Wednesday at Iceland Arena. The game went into an extra period as the Raiders fell just short with a 5-4 overtime loss against the Metro League Griffins (Fenton/Linden).

Flushing opened up a commanding 2- 0 lead in the opening frame, beginning with a Montpas goal from Tyven before Trevor Sauve doubled their advantage off of a feed from Cliff Ogle.

The Griffins would covert their first goal in the second period, but Ogle made sure that the advantage remained at two goals for Flushing, lighting the lamp with some help from Miles Michalski.

Ogle would also score again in the third thanks to a pass from Montpas, but the Griffins rippled the mesh three times in the final stanza and once in the extra period to take the 5-4 win.

Fisher was in net for the Raiders, stopping 30-of-35 shots.

The Raiders have yet to win a game and returned to the Saginaw Valley League schedule on Wednesday with a game at Saginaw Bay Ice Arena against Saginaw Heritage.