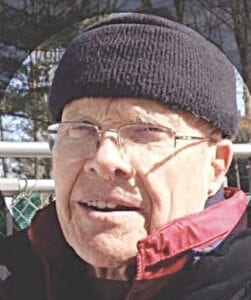 FLUSHING — Tough but fair. Disciplined but humorous. Intense but compassionate. That’s how many former students and colleagues are remembering the late Jim Orr and the style he brought to the classroom every day.

Orr, a retired math teacher at Flushing Community Schools, passed away on April 22 at the age of 90. A private funeral service was held for Orr on April 28 at Rossell Funeral Home and burial took place at Elmwood Cemetery in Yale, MI.

During his long tenure at FCS, Orr taught mostly fifth and sixth graders, along with seventh and eighth graders at Flushing Junior High School. As a former Marine and Korean War veteran, he brought a formidable presence to the classroom and commanded the attention of students so that they could grasp difficult subjects.

Ellie Sharrow, a retired English teacher who taught at Flushing with Orr, described him as a larger-than-life character who coupled his military bearing with a passion for teaching.

“He was a big guy and carried himself like a Marine,” said Sharrow, describing the first time she met Orr when she started teaching at Flushing Junior High School in 1968. “He was loud and kind of terrifying, but he was also funny and had amazing stories to tell. He wasn’t like any teacher I ever met in my life.”

Tim Jahr, a 1995 FHS graduate who had Orr as a teacher in seventh grade, said that Orr constantly reminded students to show their work in pre-Algebra class and would not hesitate to call out slackers.

“Mr. Orr was upset when one kid in my class missed school to go on an extended spring break in Florida outside the designated spring break time,” Jahr said. “So when the student came back and didn’t do his homework, Mr. Orr shouted with glee: ‘So, Shark Bait doesn’t want to show his work, eh?’ Then he proceeded to call the kid ‘Shark Bait’ for the rest of the year. That still makes me laugh to this day.”

Jahr said that Orr cast a striking image in the classroom—always wearing a dress shirt monogrammed with his initials and a pair of brightly colored dress pants that matched his tie. Despite Orr’s colorful personality and loud demeanor, Jahr said that he meticulously covered and explained the subject material.

“Mr. Orr wanted everyone in the class to grasp what he was teaching,” Jahr said. “He would go through each problem, ask us questions and take time to make sure we understood the subject. He was a great teacher.”

Jim Orr was born in Flint on March 2, 1931, the son of William and Lorna (Welch) Orr. Before his teaching career began, Orr proudly served in the United States Marine Corps’ 1st Recon Company during the Korean War.

Upon returning home, Orr graduated with his bachelor’s degree from the University of Detroit and later earned his master’s degree from Eastern Michigan University. He started his career in Southfield and Flint before coming to Flushing. He retired from Flushing Community Schools in 1990.

After his retirement, Orr was a regular at Choo Choo’s Diner in Flushing and the Flushing Area Senior Center. He also loved taking his dogs for walks, reading Greek classics and history books and running in the Crim Festival of Races.

Memorial contributions in Orr’s honor may be made to the Genesee County Humane Society or the Flushing Area Senior Center.