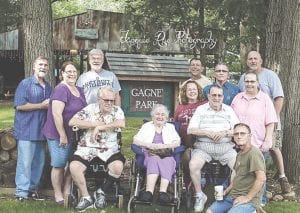 The Gagnes and their children

FLUSHING — Flushing area couple Gerry and Doris Gagne have turned yet another chapter in their journey of love together. Namely, by celebrating their 74th wedding anniversary.

For about a year, health issues have forced Gerry and Doris to live in separate senior care facilities—with Gerry residing at an assisted living complex and Doris being moved to a nursing home. But the couple was recently reunited this past week after arrangements were made for them to live in the same facility.

Craig Gagne, the youngest of the couple’s 10 children, said that the new living arrangement has given his parents a chance to fully enjoy their anniversary and kindle a romance that’s been decades in the making.

“It’s great to see them back together in the same room after being apart for so long,” he said. 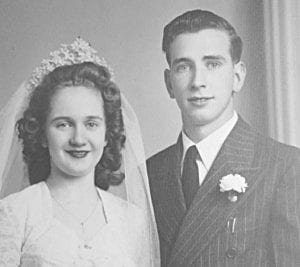 Gerry and Doris first met each other on a double date and have been together ever since. The couple lived in the Flint area during the early years of their marriage before moving permanently to Flushing in 1964, where they raised eight sons and two daughters.

Over the years, the Gagnes saw their clan continue to multiply, to the point where they now have 121 grandchildren and great-grandchildren altogether.

“Growing up in a big family, we never wanted for anything,” Craig Gagne said. “We were never shy about receiving a used toy or a used pair of pants. We passed things down the line and shared a lot.”

Craig described his parents as “pretty easy-going,” but added that his mother would lay down the rules whenever her kids misbehaved.

“If Dad was cross at you, he wouldn’t speak to you,” he said. “Mom was the enforcer when we stepped out of line. If we swore or mouthed off at her, she’d make sure we got a taste of soap.” 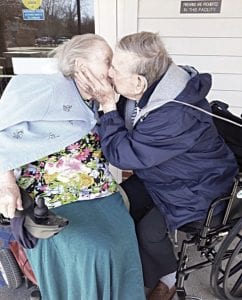 Ultimately, growing up in Gerry and Doris’ household meant having “plenty to eat, plenty of Christmas presents under the tree and plenty of love to go around.”

Life lessons and practical skills were also passed down at the Gagne household.

“They taught us how to be handy around the house,” Craig said. “Dad taught us boys how to work with wood, do plumbing and build things…and we all learned to cook and do dishes from Mom.”

As they celebrate another year together, Gerry and Doris maintain that their biggest secret to maintaining a loving marriage is simple: being honest with one another.

For his part, Gerry said his key to building a strong marriage was “finding the woman that I liked.”