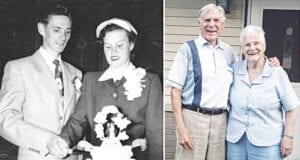 FLUSHING TWP. — Robert John Smith met Barbara Mae Witt in 1949 when she moved in with the family of Rev. Waldo Martindale, pastor of the First Baptist Church in Flushing. Bob claims he chased his “Bug” until she caught him. Bob and Barb married on June 16, 1951. They have three children, Joyce (married to Rick Wierzbicki), David (married to Debie Arndt) and Timothy (married to Kelli Koons.)

Bob was employed by Buick Motor Division and General Motors Parts Division and retired in 1979. Barb was employed for 15 years as an optometric assistant for various local optometrists. After retiring from their primary employments, they spent winter months in Delray Beach, Florida, returning to spend summers in Flushing with family. They have seven grandchildren and 12 great-grandchildren.

Church is very important in their lives. Bob and Barb helped to build Trinity Baptist Church on Elms Road in Flushing. Later, they joined Mayfair Bible Church on Pierson Road in Flint. Bob was active in numerous roles at the church, including usher and deacon. Barb was active in running Vacation Bible School attendance, as well as managing the church library and other administrative activities.

A small dinner party to celebrate this milestone anniversary for Bob and Barb has been planned by their three children. –Submitted by Joyce Wierzbicki, Flushing Township.